The increase in temperature has caused the lake outburst that was formed two years ago, damaging some portions of the Kakaroram Highway (KKH), irrigation channels, powerhouse channel and orchards, Deputy Commissioner Fayyaz Ahmed told local media. The flood has also damaged the reservoir, headwork and water supply channel of the Hassanabad powerhouse.

The district administration has imposed section 144 in Hassanabad village, the Hassanabad Nullah and its surrounding areas restricting the movement of people and suspending all kinds of vehicular traffic on the KKH. 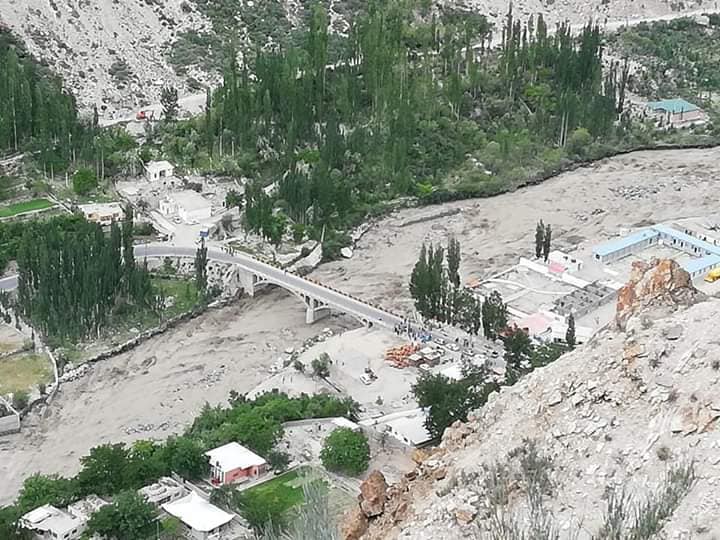 The administration has warned the people living in low lying areas along the banks of the Hassanabad stream to shift to safer places.

An official of the Disaster Management authority Gilgit-Baltistan told The High Asia Herald the swollen waters in the stream continue to damage land putting many houses in danger.

The assistant director GBDMA Shahzad Baig told The High Asia Herald that 14 families have already been shifted to safer places. Many more houses are facing threat from the floods.

The surge in the glacier was observed in June 2018, when it blocked the water flow in Hassanabad Nullah (stream) creating a lake upstream. The water level in the lake is increasing fast, posing a threat to low-lying areas downstream.

Climate change is causing most glaciers worldwide to shrink, but due to a meteorological anomaly, this is one of a few in the Karakoram mountain range in that are surging.

Hundreds of tons of ice and debris are pushing down the valley at ten times the normal rate or more, threatening the safety of the people and homes below.

Flash floods caused by glacial lakes, ice and rockfall, and a lack of clean and accessible water are all serious risks for those close to its path.

“When a glacial lake bursts there is an enormous amount of not only ice, water and debris that falls through, but also mud and this has devastating effects, it basically destroys everything that comes in its way,” said Ignacio Artaza of United Nations Development Programme (UNDP), Pakistan.

But repercussions of the Shisper glacier surge has implications not just for those living in its basin, but for the whole of Pakistan which relies on it for much of its food.

Professor Andreas Kb from the University of Oslo says Pakistan must adapt its “monitoring and response strategies, and risk management in general” to contend with both surging and shrinking glaciers.

Authorities, working with the UN, are setting up early warning systems using sensors positioned on top of the Shisper glacier and downstream to alert communities.

But the challenge for Pakistan extends beyond crisis management to the long term water conservation and storage, experts say.