ISLAMABAD, Aug 7: The people of mountain regions like #Gilgit-Baltistan (GB) are bearing the brunt of the climate change and mega projects. However, their voices are not being heard at the policy level and hence, the food security of the local population especially linked with agriculture is being seriously jeopardised.
This was the crux of views expressed by young researchers, development experts, journalists, and students at a seminar on “Agriculture Sector of Gilgit-Baltistan – Challenges and Opportunities” held at the Sustainable Development Policy Institute (SDPI) here on Monday.
The seminar was organized by the Gilgit-Baltistan-Talent Exploring Society (GBTES) in collaboration with SDPI’s Young Agriculture Research Group (YARG), Pakistan Youth Climate Network (PYCN).
The speakers emphasized the need for adaptation to modern techniques of farming, creating awareness about the environmental degradation, the inclusion of GB in policy and decision-making processes while launching mega projects, investment in human skills, lobbying at national regional and international forums 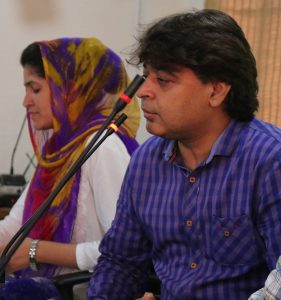 about the potential of agri-economy of GB and the impacts of climate Change.
They also called for research-based policy recommendations and local gender-inclusive action plans to meet the emerging challenges.
They said Gilgit-Baltistan’s agriculture and horticulture sectors have enormous potential to grow but due to negligence and apathy on the part of the government and capacity issues of local agriculture extension departments, marketing and transportation issues, the two sectors have not been developed on modern lines to benefit the local people.
They said neither at federal or at GB level, any action plan or policy was envisaged to respond to grave challenges including the erratic rain patterns, destructions of crops and pest attacks on fruits due to the rising temperature and deforestation in the areas.
While lending their support in favour of CPEC terming it as a key project for the development of Pakistan, the speakers said that it was unfortunate that no environmental assessment was carried out to know that how the project would have its negative socioeconomic impacts on the local population and how these could have been reduced or mitigated.
Earlier, Shafqat Aziz, head of Advocacy and Campaign of the #SDP, I explained the importance of local adaptation plan of actions. He said that keeping the diverse climatic impacts in different parts of #GB, these plans could play crucial needs to save the lives and livelihoods of the people living in different regions.
He termed deforestation a serious challenge that should be responded with the active involvement of local population, especially youth and through creating linkages between the different stakeholders.
He urged upon the youth to come up with specific recommendations for policy actions that should be gender inclusive as women and children suffer the most as a result of climatic impacts.

Amir Hussain, a development expert in his key-note paper said that crops in GB were being seriously hit as a result of climate change. “We could save local agriculture by supporting farmers in terms of provision of adaptive agricultural technology. Yasir Dil of #PYCN on the occasion emphasized on strengthening youth linkages and their engagement in practical activities and policy making to save the environment and to respond to the challenges of climate change.
Misbah Karim with the help of her detailed presentation covered various aspects of agriculture and the adverse impacts of climate change on local agro-economy.
She said the GB’s 90% area is mountainous. Only 2% of the 4% cultivable land is under cultivation and half of the cultivable land goes waste. She said 55% of the fruits produced in the region goes waste due to transportation and storage problems.

She also spoke about the direct and indirect impacts of climate change on crops and fruits.
Nizar Karim gave a presentation about the #GBTES a platform set up by the students of Peer Meher Ali Shah Arid Agriculture University Rawalpindi, its activities, aims and objectives. #Agriculture for Hope is the main project through which they want to do a baseline research and data collection about the agri-economy of GB. The most encouraging part of their activities
is the participation of a large number of female students and their motivation to involve youth in serious activities.
The seminar was the first of a series of activities they have planned to carry out in GB and Islamabad.
The event was part of mainstreaming the voices of youth and people from remote mountain communities in tackling the challenges of agriculture and environment as well as the impacts of climate change on the lives and livelihoods of the people.