ISLAMABAD: An event featuring speeches and mystical music was held in the federal capital on Saturday to remember Allama Naseeruddin Naseer Hunzai, one of the leading poets of Burushaski language.

Singers and musicians presented distinctive flavours of music from Gilgit-Baltistan and Sindh and kept the audience spellbinding for almost three hours. A large number of people, mostly from Gilgit-Baltistan, had thronged the Pakistan National Council of the Arts (PNCA) to enjoy mystical music blended with a unique expression of spirituality.

The event titled: “Mystical Musical Colours of Karakoram” was organized by Burushaski Research Academy in collaboration with PNCA to “promote the message of peace, love, co-existence, and pluralistic values,” as one of the organisers put it. 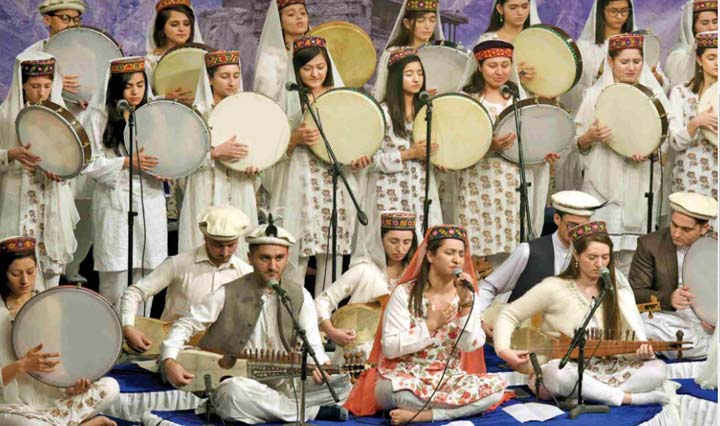 Alongside the musical performances, the intellectuals, as well as the audience, shared huge eulogy to the Allama Naseer Hunzai for his scholarly work and contribution to Burushaski language.

The speakers informed the audience that Allama Naseer Hunzai established Burushaski Research Academy and authored over 100 books on Quranic wisdom. many of the books have been translated into English, French, Arabic, and Persian.

Ms Awan, while speaking as the chief guest lauded the efforts of the academy and the organisers in arranging the beautiful event which will help in realizing the objective of the government to promote peace and harmony in the country.

She said that the people and culture of Gilgit-Baltistan present the real face of Pakistan which based on love for peace and humanity.

She said that Gilgit-Baltistan is blessed with heavenly beauty and offers huge potential for tourism.

The adviser assured that the government would take every measure to promote tourism in the region so create jobs and economic opportunities for the youth.

She advised the Burushaski Research Academy to organize such cultural events in other parts of Pakistan and offered her ministry’s support in this regard.

Dr Iqbal while sharing his views with the audience said that such efforts are the need of hour to introduce the cultural and spiritual heritage of Gilgit-Baltistan to the world.

He said that the people of GB have been deprived of their rights and opportunities. Now it’s our collective obligation to strive for the rights of the people and promote economic and cultural potential.

Italy’s ambassador Stefano Pontecorvo highlighted the assistance of his government in various projects in GB to create economic opportunities and to protect the environment in the areas.

He assured the audience of the continued support of his government to the development of GB.

The instrumentation was simple, with the rubab, Chitrali sitar, and daf. While rubab runs and daf beats moved the compositions. Mehrangez was at her best, with harmonies working smoothly, complemented by her backup vocalists.

The instrumental folk alghoza player’s warm and passionate traditional music crossed from one part of the country to another.

“I remembered why we love Akbar Khamiso’s inspiring and cheerful solo performances. He always brings joy to with him when he plays the alghoza,” Imran Nasir, one of the audience members said.

Another Akbar Khamiso fan, Bilal Khan, said that his songs are full of breathtaking texture.

Niaz Qutoshi, a flute player from Hunza based in Lahore also added unique flavors in the colorful musical evening.

Dr Parveen Ashraf, a social activist and one of the organizers, told High Asia Herald that the BRA is engaged in linguistic research of the indigenous language of Burushaski and promoting national cohesion, healthy activities among the youth.

The Brushusaki language is spoken in Hunza, Nager and Yasin valleys, Gilgit city besides a large number of people that have been migrated to other cities such as Islamabad, Lahore, and Karachi in quest of better livelihoods opportunities, she concluded.

Another member of the audience described the concert as an outpouring of happiness.

Shafqat Aziz is Assistant Editor of The High Asia Herald