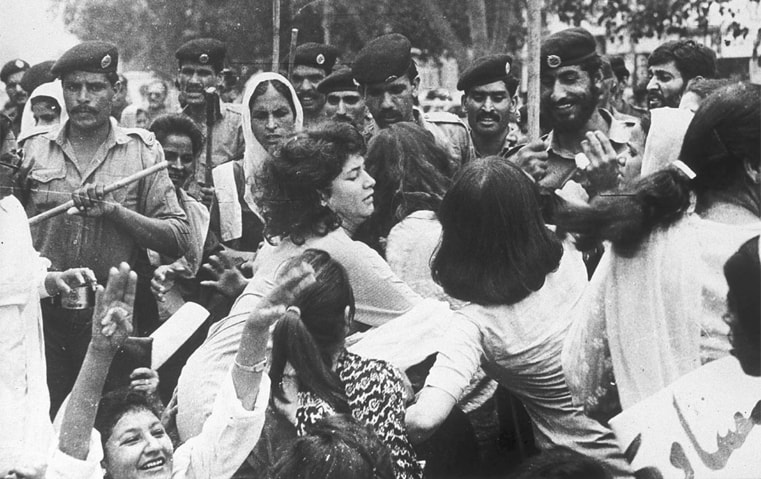 In commemoration of the National Women’s Resistance Day, the Awami Workers Party pays tribute to the undaunted women who stood up against the military dictatorship of Ziaul Haq.

On February 12, 1983, hundreds of women marched on the streets of Lahore against the discriminatory anti-women laws (Hudood Ordinances, Law of Evidence, Qisas and Diyat laws). These laws directly attack the status and rights of women in Pakistan under the garb of so-called Islamisation.

On this day, the Women’s Action Forum and Pakistan Women’s Lawyers Association mobilized a mass of women to march towards the Lahore High Court for a public demonstration against the anti-women laws and policies of the military regime. The police blocked off the area to prevent their march, and later unleashed tear gas on them and assaulted them with batons. Several women were arrested and many more severely injured as they fearlessly stood up for their fundamental human rights by demanding equality and raising their voice against the brutal, oppressive and retrogressive military dictatorship.

But despite the violent crackdown, they stood tall with passion, courage, and determination, laying the foundation of women’s resistance and urban feminist movements in Pakistan. Today, 37 years after that day, the struggle for equality still continues and is strengthened by the socialist-feminist movements throughout Pakistan. Women of this country struggle against everyday forms of patriarchal violence, abuse, harassment, and rape. They also struggle to attain fundamental constitutional, legal, economic and political equality while continuing to fight against social injustices in both public and private spheres.

But none of the mainstream political parties have shown any commitment to women’s rights. On the contrary, the current government lacks a basic understanding of women’s rights movements and is openly anti-feminist. The rights and access of women to education, employment, housing, healthcare are important feminist issues but the PTI government has only helped to exacerbate capitalistic exploitation through inflation and anti-encroachment drives.

AWP strongly condemns the recent demolitions of katchi abadis and considers Housing For All a feminist issue, as, without safe shelter, abuse, harassment, and violence will continue unabated. We, the members of Awami Workers Party Islamabad-Rawalpindi, stand with all the women who organize against all forms of oppression and exploitation.

We pledge to continue our struggle for the emancipation of women and reaffirm our commitment towards creating an egalitarian society that is free from all forms of exploitation and discrimination. We call upon all progressive organizations, feminist movements, and resistance groups to express solidarity with AWP in supporting the struggle for the creation of a socialist-feminist society.