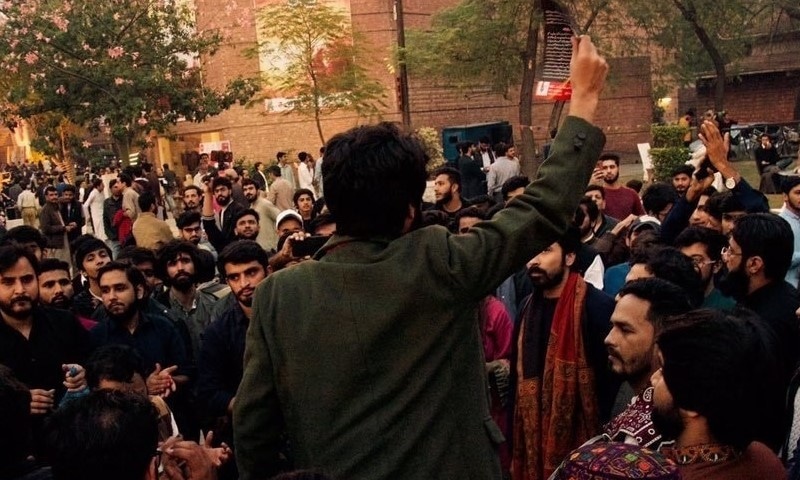 Students will march on Friday, Nov 29, in over 50 cities of Pakistan and its administered Kashmir as well as Gilgit-Baltistan for their rights including restoration of student unions, affordable and quality education, transportation and hostels

As the mobilisation for “Student Solidarity March” gains momentum with the song “sarfaroshi ki tamanna’ reverberating through Pakistan and its controlled Kashmir and Gilgit-Baltistan, so does the intimidation of students by the government and universities asking the students not to partake in the march. 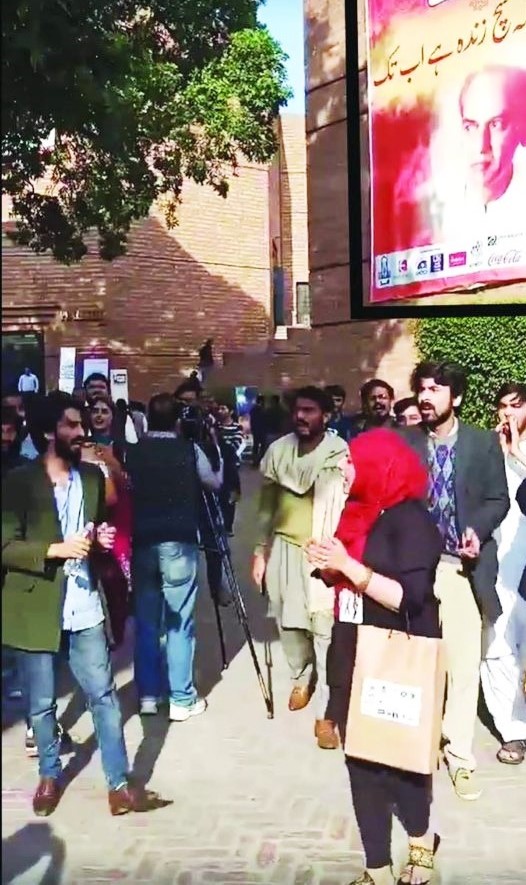 The song “Sarfaroshi kī tamanna ab hamare dil mein hai/Dekhna hai zor kitnā baazu-e-qatil mein hai,” sung by a group of students on the eve of Faiz Festival in Lahore, continues to reverberate throughout the plains of Pakistan and its controlled mountain regions of Kashmir and Gilgit-Baltistan. The video clip of the slogan-chanting students galvanized other students and took the whole of Pakistan, Kashmir and Gilgit-Baltistan by storm. At the same time, it triggered a debate in the ranks of the Left and Right about the slogan ‘Red’ and the class of the student activists dubbing them as ‘burgers’.

As the mobilisation for ‘Student Solidarity March’ gains momentum, so does the intimidation and threats to students from two universities asking the students not to partake in the march.

According to media reports, Balochistan Government has directed the Balochistan University to ban political activities on the campus. Punjab University has banned entry of Hasnain Jamil Faridi, one of the activists of the Students Action Committee (SAC) from entering the campus while cancelling his M.Phil Degree.

These moves have prompted strong reactions from human rights defenders and politicians.

The Human Rights Commission of Pakistan (HRCP) has said that “it’s alarmed by reports that students supporting the march are being harassed, facing rustication or being dislodged from their hostels in an effort to restrain them from participating in violation of their right to peaceful assembly.”

“The HRCP is also concerned to learn that the Governor’s Secretariat in Quetta had issued a notification to the University of Balochistan, banning all political activities and gatherings and giving security personnel the authority to prevent these,” Harris Khalique, the secretary of the premier rights watchdog of Pakistan, said.

In a statement he urged the government to take the legitimate demands of the solidarity march seriously and an end to unnecessary interference by security forces on campus.

The HRCP has called for functional anti-harassment committees with student representation, and for the restoration of student unions.

The AGHS, a law firm established by the iconic rights defender, Asma Jahangir, has also expressed concern. The government and universities’ administrations had started taking punitive measures against the students only for demanding their constitutionally guaranteed ‘right to association’ and form student unions in their respective institutions.

It may be recalled here that on November 29, progressive and nationalist student organisations would organise rallies, march on streets in main cities of Pakistan and its administered Kashmir and GB to press the government for restoration of students unions, the reversal of the decision of privatization of education, cut in the higher education budget, curbing sexual harassment and discrimination based on ethnicity, gender and religion in higher educational institutes, provision of hostel, transport facilities for students and the removal of security personnel from campuses.

The decision to organize  ‘Student Solidarity March’ was taken early this month by the Students Action Committee (SAC), a conglomerate of over two dozen student bodies from Balochistan, Khyber-Pakhtunkhwa, Punjab, Sindh, and Pakistan-administered Kashmir, as well as Gilgit-Baltistan, after the PTI government drastically slashed the higher education budget by almost half, leaving the students on the lurch.

The rising incidents of sexual harassment and intimidation of those students coming from peripheries on university campuses in Punjab, Balochistan, and Sindh and free hand given to and right-wing student organisations despite heavy presence of security forces, have prompted the progressive and nationalist student bodies to launch the march.

According to an online poll by a newspaper, 85% of the participants support the student-unions’ restoration while 15% oppose the demand.

The opposing opinions have argued that the restoration of student unions would result in violence. Arooj Aurangzeb and Mohsin Abdali from the Progressive Students Collective have dispelled the notion and argue that the problem is with the circumstances prevailing in Pakistan. In the 1950s and 60s, student organisations raised their voice for the marginalised and against dictatorships, and we did not witness violence from them or among them.

Violence started when student unions were banned and a fascist student organisation was allowed to become a force on university campuses.

“It is at the core of our demands because the students want representation in decision making and policy-making process, especially that effects their future and running the affairs of the campuses”, said Haider Kaleem, one of the organisers of the march.

Many progressive political parties, academics, lawyers and other organisations have also shown their support for the student march.

In the video messages posted on social media, they have urged the people to participate in the event and demanded the restoration of student unions and abolition of the class-based education system.

Noted physicist, peace activist and intellectual Prof Hoodhbhoy has also endorsed three demands of the students while terming such demands rational and legitimate as they are citizens of this country. They form over 60% of the population and are the future leaders. They want their fundamental right to freedom of association and restoration of student unions to raise their social and political consciousness through healthy political activities.

“Should politics be relegated to only military generals and elite class? Not at all,” he exclaimed.

He recalled that the student unions existed even during the British colonial period and demanded the restoration of student unions. He called for the reversal of the cut in the education budget.

“The country needs mass and quality education and that could be possible through a substantial increase in education spending. There is a need not only an increase but steps to end massive corruption and embezzlement in the education sector. We need more universities, colleges, and schools not defence housing societies,” he argued.

He strongly advocated freedom of expression and calls for an end to restrictions on social media, electronic media and on campuses.

They reaffirmed their party’s full support to the SAC and hoped that this will strengthen democratic forces.

They recalled the role played by student unions in struggle for democracy and rights of the working class and marginalized people in the late 50s, 60s, and 70s.

The student march carries on the glorious tradition of progressive politics associated with so many nameless youth in this country who have sacrificed for the emancipation of all from class, gender, ethnic and other oppressions, and the building of an egalitarian and free Pakistan, and world. All democrats and progressives must support it.

“One aspect of the march is raise voice to restore the student unions through which they can learn democratic values, tolerance, and counter extremist tendencies. The other important aspect of the march is the demand for improvement in the education system and get fundamental rights to decent accommodation, quality education and an overall improvement in education system which is in a shambles,” said Mr. Hussain.

Student union is the backbone of democracy and nursery of future leadership, commented Ms Shahjehan, who is president of WDF.

“While the media and liberal mainstream continue to obsess about yet another episode of intrigue in the never-ending story of the military establishment, its b-team political lackeys and a system devoid of imagination about genuine alternatives, please think for just a few minutes about what will happen if you don’t come to the Student Solidarity March? What has been happening at the highest levels of power for most of this country’s existence will continue happening if we don’t put in our lot,” said Dr Asim Sajjad Akhtar, AWP Punjab President in his message on his Facebook page.

For Dr Akhtar, who teaches at Quaid-i-Azam University, the student march not only represents a clear rejection of the legacy of dictatorship, it also represents a politics for the future, given the huge youth bulge (about 140 million Pakistanis or 60% are under the age of 25).”

Our mainstream political field, according to Dr Akhtar, is heavily militarized and lacking meaningful vision; patronage-based parties compete with one another to win the establishment’s favour, and this means that the issues confronting the majority of working people in this country, that should be the forefront of political debate in a democratic polity, remain conspicuous by their absence.

These include everyday material concerns like employment and livelihoods, housing, education and health, the trials, and tribulations of war-ravaged and resource-rich peripheral regions like Balochistan, KP, Sindh, Gilgit-Baltistan, and Kashmir, as well as deeply entrenched patriarchal, racial, religious caste hierarchies in society that rear their head every day in sensationalist terms through tidbits about little girls being raped/murdered and ethnic/religious communities being subjected to humiliation and disappearances, but never followed by meaningful political action.

Outspoken politician and former member of Senate Farhatullah Babar dubbed the march as encouraging and hoped that it may turn out to be the harbinger for freedom and change so passionately yearned by the people.

“It is reassuring that students throughout Pakistan are organizing a Student Solidarity March on November 29 to demand the lifting of restrictions and to reassert their right to be heard in matters of education, academic environment and overall freedoms in the country,” Mr. Babar said.

The voice of the students has always been dreaded by dictators. That was why a military dictator General Zia sought to stifle this voice by clamping a ban on student unions through a martial law regulation, he observed.

“As the nation witnesses unprecedented clamp down on free speech and dissent in the name of ‘fifth generation warfare’ it is time that this voice reverberates again with full force throughout the country,” the former senator said.

Aliya Amirali while commenting on student march said “As a former member of the National Students Federation, who was organizing students during Musharraf’s dictatorship, I am delighted to see that the students’ movement is consistently gaining strength across the country.

The students’ march, she argued, is an example of the growing unity and organisation among the student body across regions, institutions, and ideological divides; all the more important in a time where students are being attacked economically through rising fees and privatisation of education, politically through a continuing ban on the students union and complete absence of student representation and autonomy on campus.

She added further that “as the gruesome attacks on Nimrita and the Baluchistan University harassment cases show students are increasingly subject to sexual and physical violence.” 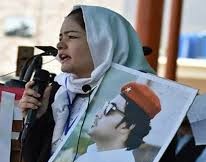 Asadullah Khan Advocate, a member of Islamabad Bar Association and Secretary Young Lawyers’ Forum, believed that one can’t imagine of democracy without student unions and their participation in the democratic process on campuses.

Jalila Haider, a women rights activist and member Balochistan Bar Association, and Amna Mawaz Khan, a famous classical dancer and activist also endorsed the demands of students and supported the march for a better future.

Activists argue that the ban on student unions is a violation of Article 17 of the Constitution which guarantees every citizen the right to form associations or unions. The sole argument given against student unions is that they have given rise to violence in the past.

According to the student activists, universities are supposed to be places where students engage in intellectual debate, evolve their political thought, develop democratic culture, learn the value of the vote, and through their unions address the power disparity between students and the university administration.