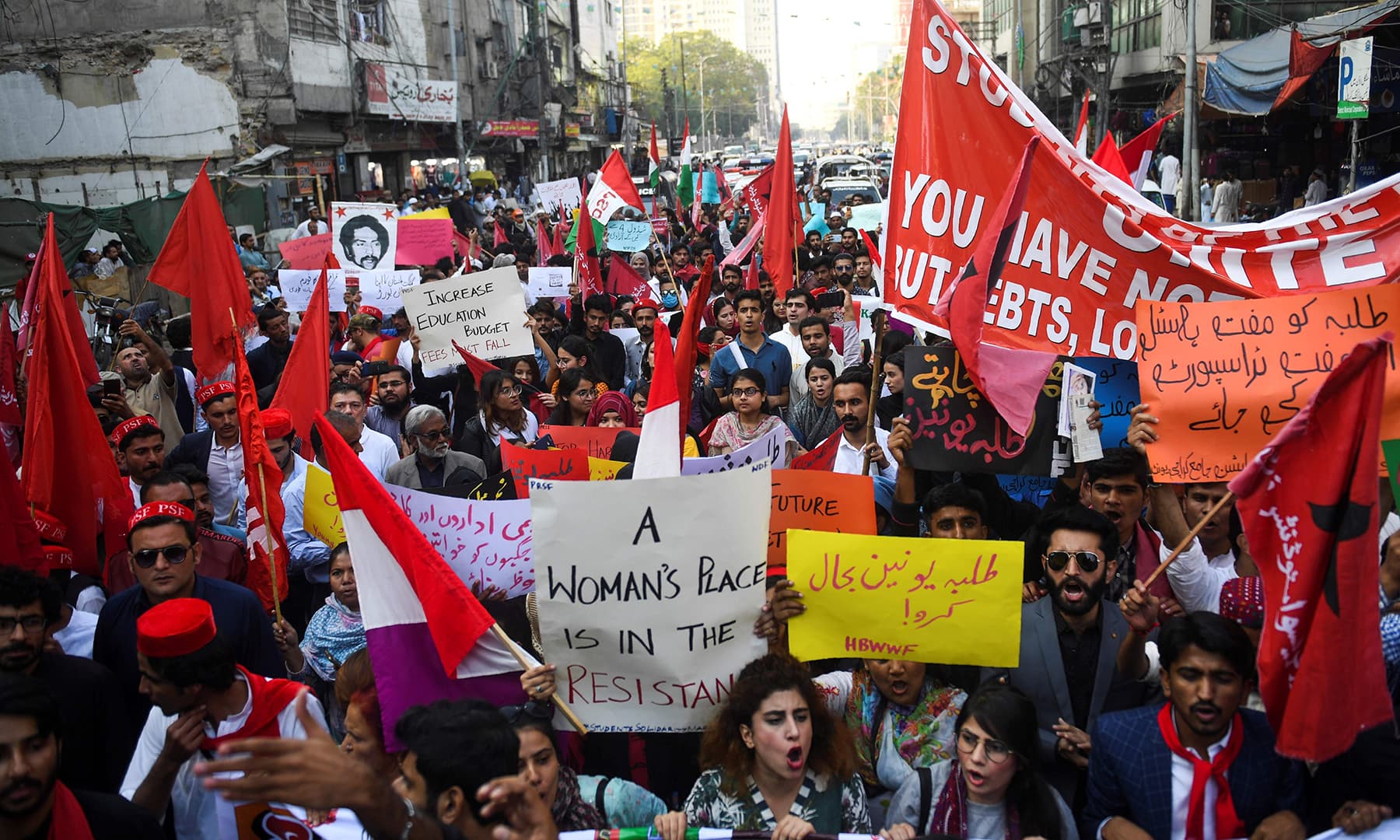 Activists take part in a demo demanding the revival of student unions, and batter education facilities, in Karachi on Nov 29:– AFP

in a first, Sindh cabinet Monday approved a bill to lift the ban on the student unions in provincial educational institutes. The bill will be passed after consultation with all stakeholders.

According to the proposed “Sindh Students Union Act, 2019″ Bill, approved by the Sindh cabinet, “an effective system to provide for the establishment of student unions and regulating them in the province of Sindh”.

According to the draft bill, there will be a student union in every educational institute consisting of bonafide students. The union will be made up of 7-11 members elected by the students of each university or college in polls to be held every year.

Within two months of the enactment of this law, each educational institute will formulate its own rules and procedures for the conduct of their student union.

Every university or college will have at least one nominee of the elected student union in its syndicate, senate or board, according to the draft law.

The bill also binds educational institutions to constitute a committee for protection against harassment which will be gender-balanced and have at least one nominee of the elected student union.

As per the draft, the student union will be a bonafide representative body of the students of the respective educational institute and it shall, among other things: work for maintaining social and academic welfare of the students.

It shall ensure that the rights and interests of all students are suitably represented and protected. The union will organise such social, cultural, intellectual or other extra-curricular events which help in forming a student’s personality and make them responsible citizens; promote and strengthen relations between students and educational institutions, oppose and bring to light any discrimination or injustice that obstructs the social and academic life of students. The union will make endeavour to make students responsible citizens, aware of their rights and obligations towards their country as provided under the Constitution

Under the rules, the students have been barred from indulging in any “prejudicial activity” and possessing or carrying within the premises of an educational institution any firearm, ammunition or explosives.

The head of the educational institution will have the power to expel or rusticate a student as well as restrict the entry of any person to the campus. However, a “proper opportunity of hearing” will be given to the concerned student before such an order is passed.

Earlier in November, the Sindh Assembly had unanimously passed a resolution that asked the provincial government to lift the ban on student unions in the educational institutions of Sindh by introducing a code of conduct that may help avoid conflict among various student organisations in the future.

According to the spokesman for Sindh government, the bill will be sent to the Standing Committee on Law after presenting it in the Assembly. The bill will be passed by the Sindh Assembly after consultation with stakeholders.

A ban on student unions across the country was imposed by General Ziaul Haq’s military regime in February 1984. However, they were banned in Sindh even earlier in 1979, when automatic weapons first surfaced in Pakistan, and on university campuses in Karachi and Lahore.

Ironically, the continued ban has not only failed to end violence on campuses, but also resulted in stifling the intellectual growth and social development of students. The ban on student unions was briefly lifted in 1988 by the regime of slain Prime Minister Benazir Bhutto, but was challenged in the Supreme Court of Pakistan in 1990.

The apex court re-imposed the ban in 1993. Nonetheless, there have been discussions about reviving the unions, but without much progress. In his address to parliament after getting elected as prime minister, Yousaf Raza Gilani vowed to restore student unions. However, his government failed to keep the promise.

Congratulations to all students ,#SindhGovt permited to lift ban on student union ,bill will be passed in sindh assembly in ongoing session ,We proud our chairman @BBhuttoZardari who always raise voice of students & give them a historical gift to Restore Student union in sindh.
#

Last month, students marched across the country as part of Students Solidarity March, seeking restoration of unions and redressal of the students’ grievances including fee hikes and incidents of sexual harassment on campuses.