Left-wing activists have been granted interim bail in a sedition case. Ammar Ali Jan took to Twitter to announce the development. They along with slain student Mashal Khan’s father Iqbal Lala and Alamgir Wazir were nominated in FIR for participating and addressing the Students Solidarity March held on November 29.

A sessions judge in Lahore approved interim bail for two of the suspects in the case — Ammar Ali Jan and Kamil Khan asking them to submit surety bonds of Rs50,000 each. The court stopped the police from arresting them asking the Civil Lines police to submit a complete report on the next hearing on December 16.

The move by the police to pursue treason cases against the demonstrators came hours before a tweet from Prime Minister Imran Khan hinting at lifting the 1984 ban on student unions. Police say they have charged hundreds of students and activists with sedition for making “insulting” remarks against the military at a protest demanding the lifting of a ban on political activity at universities, reports Associated Press news agency.

Alamgir Wazir, who is also the nephew of parliamentarian Ali Wazir and an activist of the Pashtun Tahaffuz Movement (PTM), was picked up on Saturday. He had completed his BS in Gender Studies from the university last year and was there to get his degree. He was staying at hostel No 19 with a cousin. He was produced in court on Monday. 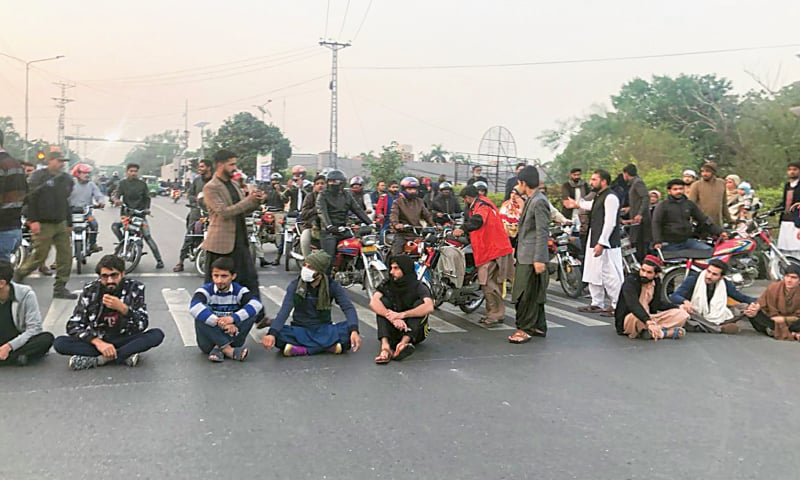 During today’s proceedings at the Cantt Kachhery, police told the court that Alamgir had been arrested on December 1 for an anti-state speech, adding that in violation of the sound system act, he had made an inflammatory speech against state institutions and created difficulties for the public and violated the law by blocking a road.

Alamgir’s lawyer, however, rejected the police request for physical remand, saying since they had CCTV footage, nothing further was required from his client.

Subsequently, the court said record proves that the police already have the CCTV footage and does not need anything from Alamgir. They also asked the investigating officer to present the challan in the case on December 16.

Interestingly, the action flies in the face of the recent statements by several ministers and government representatives who supported the students.

The students took to the streets in over two dozen cities of the country, Azad Kashmir and Gilgit-Baltistan to voice their demands, including the restoration of student unions.

Meanwhile, addressing an event in Islamabad, Minister for Science and Technology Fawad Chaudhry said he had previously told the Punjab government and other provincial governments and continues to maintain that FIRs against students should immediately be withdrawn.

Among the demands of the Students Solidarity March was the restoration of student unions and better education facilities.

Chaudhry said student unions exist in educational institutions in foreign countries such as Harvard University, the University of Oxford and the University of Cambridge and function without weapons, adding that a similar environment needs to be created in Pakistan.

“There is no doubt that student unions are an integral part of the political system of any democratic country,” he said, adding: “No political society can actually allow that you ban student unions.”

This is not the first case registered against students and activists on sedition charges. In February, an FIR was lodged in Multan where police arrested Progressive Youth Alliance activist Rawal Asad and kept him in jail for a month.

Political parties, social activists and an international rights watchdog took exception to the Punjab authorities move and demanded to drop of the sedition case against the activists.

The Awami Workers Party (AWP), the largest Left-wing political party of Pakistan also condemned the registration of sedition cases against student leaders, academics and others for participating in a peaceful march for their genuine demands.

“The move is provocative, ludicrous and violation of the fundamental right to freedom of expression and procession guaranteed by the constitution,” the AWP leaders said in a statement on Sunday.

The party’s President Yousuf Mustikhan, General Secretary Akhtar Hussain and Deputy Secretary Ismat Shahjehan condemned the crackdown on student and political activists as well as academics by authorities in Punjab, Sindh, and KP.

The AWP leaders also expressed concern at the abduction of Alamgir Khan Wazir, a former chairperson of Pakhtun Council of the Punjab University chapter from the campus for ostensibly making a speech at the student march.

Cases have been registered at the Civil Lines Police Station, Lahore nominating some of the perceived organizers and those who made speeches at the Students Solidarity March including Iqbal Lala, father of Mashal Khan, the slain student of Mardan University, who has become a symbol of resistance against extremism and state repression. Iqbal Lala was given a hero’s welcome as he arrived to express solidarity with students in Lahore.

The AWP leaders said that the students exercised their fundamental right to peaceful protest for their rights and which was acknowledged by the Prime Minister Imran Khan and Punjab Governor.

The Punjab and Sindh police have started crackdown and intimidation of leaders and activists of Progressive Students Federation, WDF and AWP for participating and organizing the march.

The AWP leaders said that the student marchers wanted restoration of union, better education facilities, an end to harassment on campuses and other education-related rights and a violence-free democratic society where everyone can live with dignity.

Alongside the continuing state repression in Balochistan and Sindh against youth and political activists, the current wave of intimidation and harassment will serve only to further alienate state from recovery it is supposed to be defending, the AWP leaders noted.

On the one hand, PM Imran has acknowledged the students’ grievances and promised to restore student unions and resolve their problems, on the other the filing of FIR against peaceful students and other citizens is a vicious attack on academic freedom, freedom of dissent. It is an attack on our future, the AWP leaders said.

Prime Minister Imran Khan has directed the federal government and the provinces to form a comprehensive strategy for the protection of students’ rights and for the speedy resolution to their problems.

They demanded immediate withdrawal of the FIR and recovery of Wazir and an end to intimidation and repression in Balochistan, Sindh, KP, Pakistan-administered Kashmir, and Gilgit-Baltistan.

Amnesty International in a statement on Sunday condemned the move asking the Pakistan authorities to drop any charges and release those arrested following Friday’s rally in Lahore.