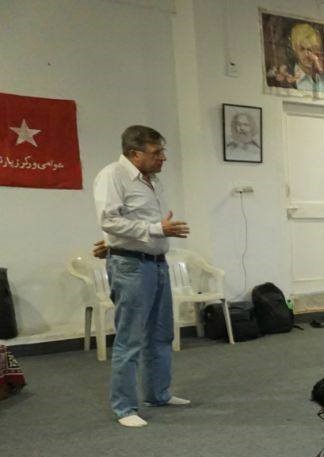 ISLAMABAD: Suppression of critical thinking and scientific enquiry have given rise to the current social and political malaise in Pakistan, says Prof Pervez Amirali Hoodbhoy, a famed physicist and social activist.

He held the establishment-centred feudal dominated political system for the intellectual decay and suffocation in the country.

“Pakistani society is afflicted by a culture of rote-learning and this explains our sensationalist and conspiratorial mainstream political discourse,” the outspoken professor commented while delivering a lecture on the life and scientific accomplishments of Stephen Hawking, a British theoretical physicist, cosmologist and author, who passed away recently.

The lecture was part of the Political Dialogue series of the Awami Workers Party (AWP) held at its office in Rawalpindi on Sunday.

A curious group of the audience comprised of students, intellectuals and progressive activists from across the twin cities attended the dialogue.

Speaking about the specifically Pakistani malaise, Dr Hoodbhoy noted that an individual like Hawking would never have thrived in this country because the pursuit of knowledge has never been encouraged by the establishment as well as the conservative political class.

He said that real social and political issues like the environment, inequality, state-sponsored ethnic, religious and sexual violence do not find any space in the corporate media, and our educational system stifles critical thinking about such matters rather than encouraging it.

“Hawking’s life and work was the quintessential example of how the human mind triumphs over matter, given that he was paralysed and spoke through a specially-crafted voice synthesizer for more than fifty years after he was diagnosed with a rare degenerative disease at the age of 20,” Hoodbhoy said.

“Hawking’s greatest contribution to science and accomplishment was the co-discovery with James Bardeen and Brandon Carter, the ‘four laws of black hole mechanics’, the ‘gravitational singularity’

Interestingly, the cost of Hawking’s medical treatment was covered by the British government’s National Health Services (NHS), and Hawking vociferously opposed the

dismantling of the welfare state when it was systematically initiated by Margaret Thatcher’s government in the 1980s.

Hoodbhoy noted that Hawking’s greatest contribution to science and accomplishment was the co-discovery with James Bardeen and Brandon Carter, the ‘four laws of black hole mechanics’, the ‘gravitational singularity’. He wrote the bestselling book A Brief History of Time.

Hoodbhoy who has taught at Quaid-e-i-Azam University and currently is a visiting fellow of leading world universities and CERN, said that Hawking maintained a leftist political position for the best part of his life, and he famously noted recently that the biggest threat to humanity is the capitalist system which has put the whole world in danger by maximisation of profit and commodification of the gains of science.

The outspoken physicist noted that science must be distinguished from technology.

“While the former is a worldview that is radically committed to verifiable truths, the latter has become the preserve of multinational companies that are in cahoots with the state to capture ‘meta-data’ and thereby subject the mass of the world’s population to the logic of capitalism and a surveillance machine which has no parallel in human history”.

Individuals like Hawking, he argued, thought of scientific inquiry as helping expand the realm of human freedom, but simply the power of science alone is not sufficient to address the exploitative and destructive basis of society in our day and age, and this is why the knowledge generated by science must inform a genuine progressive politics that addresses the needs of the mass of the world’s working people as well as future generations to follow us.

During the question-answer session, he answered about the universe, artificial intelligence, and state of research in Pakistan. He parried many tricky questions about the relationship or conflict between religion and science, morality and from the students.