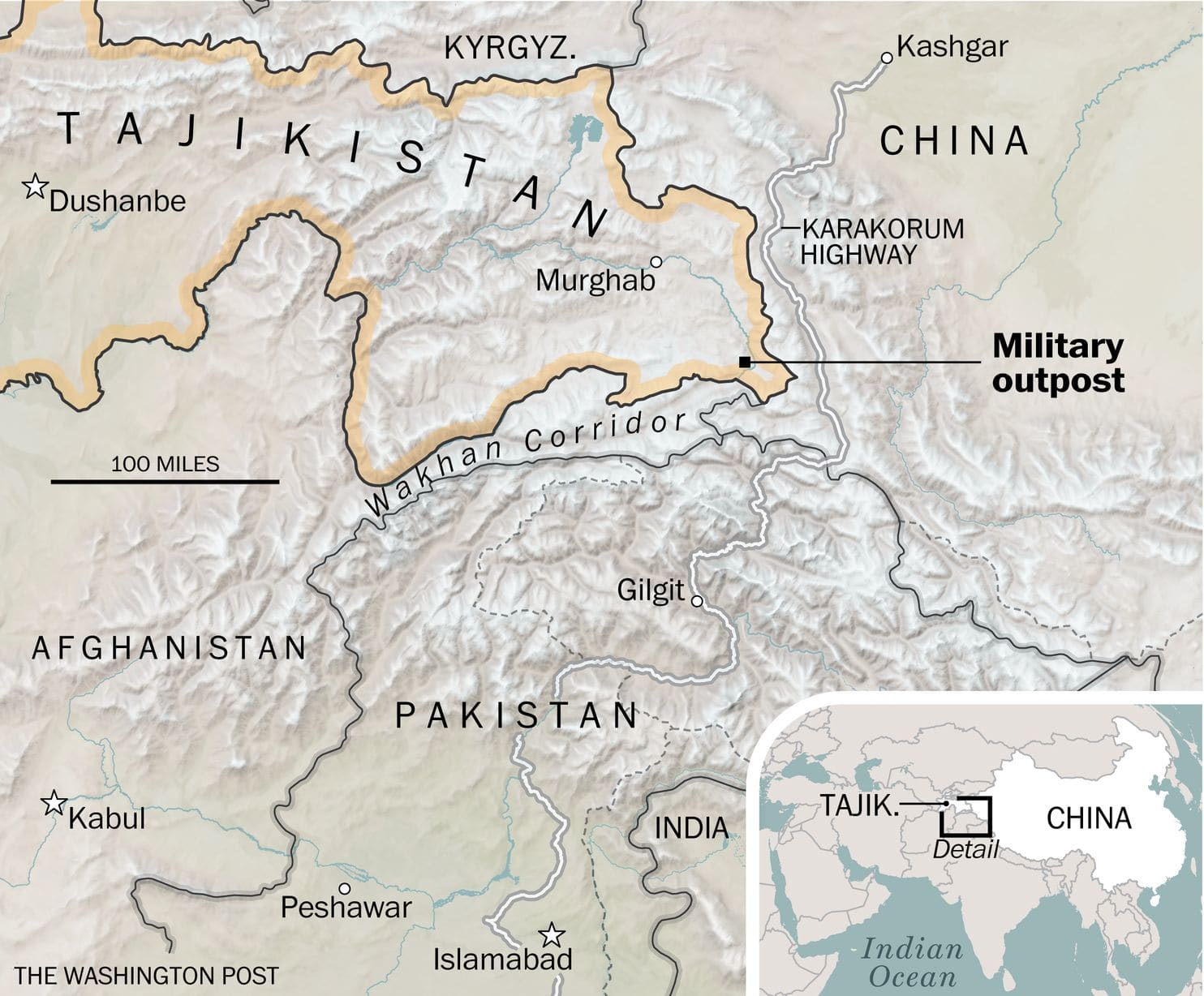 Sayvaly Shafiev leads a group of about 200 fighters from Tajikistan, Uzbekistan, and other Central Asian countries in Afghanistan, says UN report

A little-known Tajik man has emerged as a unit leader of the Islamic State (IS) affiliate in Afghanistan as the extremist group tries to expand its footprint in the war-torn country, reports Radio Free Europe/Radio Liberty (RFE/RL).
The 31-year-old Sayvaly Shafiev, who grew up in a Dushanbe suburb leads a group of approximately 200 fighters from Tajikistan, Uzbekistan, and other Central Asian countries, says a recent report by the UN Security Council.

Shafiev is also involved in recruiting Tajik fighters for IS and using online propaganda in the Tajik language, says the study by the UN Analytical Support and Sanctions Monitoring Team, reports Farangis Najibullah is a senior correspondent for RFE/RL.

Authorities in Dushanbe believe Shafiev and his associates are training their Tajik recruits in Afghanistan and sending them back to Tajikistan to create a terrorist sleeper cell.

A Tajik law enforcement official said Shafiev has been “under the Tajik security services’ radar for quite some time.”

“We know that Shafiev has become a key IS figure in Afghanistan,” he told RFE/RL on August 8. The official spoke on condition of anonymity as he wasn’t authorized to speak to the media.

Shafiev goes by the nom de guerre Mauaviya, while Tajik security services say that among the Tajik recruits he is also known as Jalolobodi.

The IS affiliate in Afghanistan calls itself the Khorasan Province, a territory that historically included parts of modern day Afghanistan, Central Asia, and Iran.

According to the UN report, Shafiev is a member of the IS-Khorasan top leadership, the shura, highlighting his significance among the ranks of the notorious terrorist organization.

Little is known about Shafiev’s life in Tajikistan, where he was born and raised in the Mirzo Rizo village of the Hisor district, west of the capital, Dushanbe, in what the official described as an “ordinary, low-income” family, Farangis Najibullah reports.

Shafiev “showed great interest” in religion from an early age and left Tajikistan in 2011 or 2012 to “study religion” in Pakistan, the official said. He spent at least two years abroad.

Shafiev left Tajikistan for the second time in 2014 when the IS was capturing significant territory in Syria and Iraq.

“Shafiev’s exact movements are not known, but Tajik security services believe he left for Turkey and spent some time there campaigning for IS,” the Tajik official said.

“He wanted to go to Syria, but it’s not clear if he entered Syria or went to Afghanistan instead,” the official added.

Shafiev’s father has told Tajik authorities that his son hasn’t contacted his family in the past two years.

But Shafiev has reportedly been active online in recent years, urging Tajiks to join IS and its “jihad.”

He allegedly helps some of the recruits obtain tickets, visas, and fake passports to travel from Russia to Afghanistan to get terrorist training in camps in the territories controlled by various militant groups.

Shafiev’s name was mentioned in a terrorism-related case in a Dushanbe court as recently as May 8.

The defendant in the case was a 36-year-old Tajik man who was allegedly radicalized by online IS recruiters while working in Russia in 2016.

According to the court document, the defendant, Tojiddin Nosirov, eventually pledged alliance to IS and returned to Tajikistan in 2017 as a member of an alleged IS sleeper cell waiting for an order to stage attacks.

The court heard that Nosirov had been listening to lectures and instructions by Shafiev and others about the jihad and IS ideology via Zello.

‘Thwarted attacks’ in Dushanbe and Shafiev

More prominently, however, Shafiev’s name has been linked by Tajik security services to an alleged thwarted plot to carry out several major terrorist attacks in Dushanbe in 2018.

In a raid in February 2018, the National Security Committee reportedly detained 14 people who were subsequently accused of planning to attack several high-profile targets, including foreign embassies, a Russian military base, and government buildings.

According to the security services, the attacks were going to be carried out during Norouz, the Persian New Year celebrations in March 2018.

While the claim of the alleged attack cannot be independently verified and scant evidence was shown to prove it, the 14 men went on trial on terrorism-related charges. Twelve of the defendants were sentenced to seven years in prison each and two alleged ringleaders were handed 26-year sentences.

In July 2018, state TV aired a documentary, The Mercenaries, prepared by the National Security Committee about the alleged thwarted plot.

Parading the defendants before the camera, the documentary claimed that the men had undergone training in Afghanistan, where they allegedly learned how to use weapons and make improvised explosive devices.

The defendants said the thwarted plot was aimed at creating chaos in Tajikistan and undermining public trust in the country’s stability.

One of the alleged leaders, 26-year-old Mahmudjon Azamov, said he had been in online contact with Shafiev since November 2015.

“Shafiev…would call on people to join the religion, to jihad, and to the Islamic State,” said Azamov, who was a migrant worker in Russia at the time.

Azamov said he spent two years in the Achin district of Nangarhar Province in eastern Afghanistan, where he underwent terrorist training from Shafiev’s associates until December 2017.

Azamov claimed he was sent back to Tajikistan with an order by Shafiev to join the sleeper cell of other IS followers there and wait for an order to carry out attacks.

RFE/RL cannot independently verify Azamov’s and other defendants’ claims and it remains unknown whether their accounts were obtained under duress.

In January 2019, Afghan authorities handed over eight Tajik nationals arrested in Afghanistan for their alleged connections to IS.

“Two of them were captured during an Afghan security operation, three were detained in Kabul, and another Tajik national was arrested along his wife and child while crossing into Afghanistan from the Iranian border,” the Tajik law enforcement official said.

During interrogations in Dushanbe, six of the eight claimed they were in direct contact with Shafiev and that it was Shafiev who convinced them to join IS, the official told RFE/RL.

Speaking from Kabul, Afghan Defense Ministry spokesman Rohullah Ahmadzai told RFE/RL that the Afghan and Tajik governments have established close cooperation, intelligence sharing, and a “coordinated campaign against IS, which they see as a common threat to the stability of the entire region.”

Ahmadzai said a “number of Tajik nationals, including both men and women with links to IS,” have been detained in Afghanistan and are currently being held in Afghan custody.

IS footprint in Tajikistan

With ongoing clashes and air strikes in Afghanistan, it’s not known if Shafiev is alive or dead. But he marks a second Tajik national becoming a significant figure in the notorious terrorist network.

In 2016, the U.S. State Department named Halimov as a key member of IS and offered a $3 million reward for information on his whereabouts.

IS claimed a terrorist attack that brutally killed four Western cyclists in southern Tajikistan in July 2018.

The government, however, blames the attack on the banned opposition group, the Islamic Renaissance Party, a claim the party strongly denies.

Two outbreaks of deadly prison violence in Tajikistan have also been linked by the government to alleged IS members in recent months.

Tajik authorities say three prison guards and 29 inmates were killed in a riot in a maximum-security facility in the Vahdat district outside Dushanbe late on May 19.

The Interior Ministry said the violence was instigated by 30 inmates, including 17 IS members. The claim cannot be independently verified.

In November 2018, violence broke out at another maximum-security prison in the northern city of Khujand. The government said 21 prisoners and two prison guards were killed in that incident.

A website linked to IS claimed that one of its “fighters” was responsible for starting the riot in Khujand, a claim impossible to confirm.

The government in Dushanbe says some 1,900 Tajik nationals had joined IS in Syria and Iraq before the terrorist group was largely defeated there.

Hundreds of the Tajik fighters and their families were killed in fighting and air strikes. Some have returned to Tajikistan, taking advantage of an amnesty and have been reintegrated back into society.

In April, Tajikistan repatriated 84 children and teenagers from Iraq whose Tajik mothers have been imprisoned by Iraqi authorities under charges of belonging to IS.

According to the UN Analytical Support and Sanctions Monitoring Team, approximately 100 fighters from Tajikistan are currently believed to be based in Afghanistan with various militant groups. Up to 30 of them belong to Jamaat Ansarullah, the study says.

by Dr Aziz Baig The Coronavirus, perhaps the deadliest in the last century that …