Shakespeare in his two classic masterpieces Hamlet and Merchant of Venice has exposed the aristocracy and upper classes’ corruption, immorality, their oppressive behaviour towards the middle and lower classes, their victimization, exploitation, and commodification of the poor through rituals.

The characters and the themes in the two plays have amazing similarities to the Pakistani settings and the hegemony of its 2% ruling clique – the feudal lords, capitalist, religious mafia, civil and military bureaucracy – on resources and wealth.

According to Abrams “in any historical era, the dominant ideology embodies, and serves to legitimize and perpetuate, the interests of the dominant economic and social class”. The upper-class constructs ideologies which are beneficial to themselves and then they spread these ideologies among the lower class to make them oppressed and obedient.

In this backdrop, one can easily understand the misuse of religion or authority by elite classes for their interest, especially in Gilgit-Baltistan’s context.

The mercantile elite from Karachi and their cronies in Gilgit-Baltistan are the “gentile Venetians” as Marx used for the rising capitalist and mercantile classes of the early 19th century.

The mercantile class has been manipulating the local indigenous practices by imposing a certain system of divine practices and business that only serves their interest through which they control resources, institutions, and minds of people to perpetuate their hegemony. The AKDN institutions are the best example of this hegemonic social, cultural, economic system to control and exploit people in Gilgit-Baltistan and around the world.

The poor performance of AKDN institutions indicates the decline and decay in the organization due to its top-down model and the dominance of a certain mercantile class who have turned it into a tool for amassing wealth through exploiting and dispossessing the poor communities of Gilgit-Baltistan and Chitral. 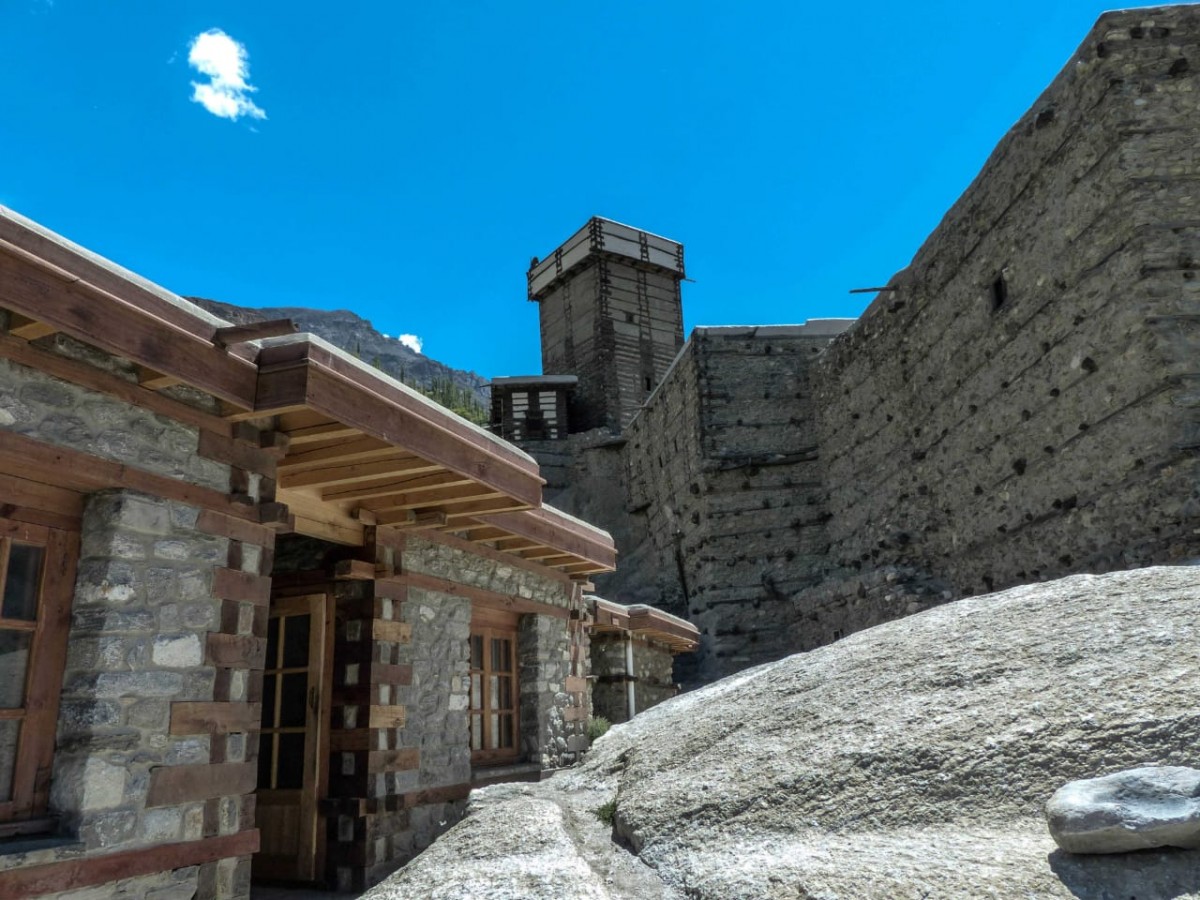 Jewel in the crown

Altit Fort is one of the few attractions that come into one’s mind when thinking of visiting Hunza. But there are some other attractions which have enhanced the Altit Fort’s importance and grabbed the attention of international and national media. If you search Hunza on social media, you can surely end up staring at pictures or videos of Kha Basi Royal Garden, the iconic views from Kha Basi Café (KBC), the Altit Fort, the all women-run carpentry workshop of Ciqam, the Kha Basi Residence (KBR) and or the Leef Laarsen Music Centre (LLMC).

The Altit Fort Complex (AFC) is the flagship project of the Aga Khan Cultural Services Pakistan (AKCS-P), an organ of the AKDN. Ciqam is a subsidiary project of the AKCSP that is fighting to gain administrative and financial autonomy from its parent body.

This article seeks to highlight the impending challenges to these projects because of their uniqueness, inclusiveness and women empowerment.

However, the traditional patriarchal tribal society, the ruling elite of Hunza and the mercantile elite feel threatened from these initiatives and have been conspiring to either control these initiatives and grab their assets worth millions of rupees or remove the brain behind these successful projects of emancipation and women empowerment.

Ironically, Safiullah Beg, the AKCS-P’s senior manager and the man behind the organisation’s success stories has been unceremoniously shown the door after serving for 16 years. He was in-charge of the AFC and initiated such exemplary pro-poor and pro-women projects as Ciqam, KBC, KBR, and LLMC.

These projects are run predominantly by women not only as workers but also in the decision-makers. LLMC teaches folk music to young boys and girls from low-income and working-class households.

Ciqam, the jewel in the crown of AKCSP, has been portrayed as a role model for women empowerment in international and national media. Its carpentry workshop, construction, and field survey departments are managed and run by women.

KBC utilizes local organic products and employs women from low-income households. Altit Fort Museum is also dominated by female guides. Even in KBR, all departments from housekeeping to reservations are run by female employees.

Apart from employing low-income and vulnerable members of the community, the projects also contribute a lot to the local community in terms of research work, infrastructure development, and revenue generation.

Mr Baig is also the pioneer of an independent community-run power project and a collective plantation project in his native village of Ahmedabad, Hunza. A well-read person, he discusses with young people the development theories or the philosophies of Althusser, Habermas, Zizek, and Badiou.

His abrupt removal has come at a very crucial time. Since he was in line to replace the incumbent AKCSP CEO Col (retd) Salman Beg after his retirement which is overdue. Col Beg at the age of 67 years has been holding the position for the last 22 years in violation of rules.

Secondly, the autonomy of Ciqam was to be negotiated around this time of the year. It’s the assets the women employees have created through their hard work and with the financial assistance of Norwegian embassy which has invested over Rs200 million on Ciqam and the powerful lobby in AKDN wants to grab all the assets by making Ciqam an NGO. Similarly, AKCSP chairman is holding the post for the last 25 years.

The hegemony of the mercantile class

The move by the mercantile elite is an attempt to stifle the voice of the marginalized in their structure. The powerful elite has turned the AKDN into a top-down and extractive institution where the CEO’s earn more than Rs1 million salary while the low-rung employees do not even get anything near to minimum wage of Rs15,000. In addition, they have been using AKDN as a tool for the expansion of their personal business empires.

Some of the bigwigs are now grabbing land in Hunza and depriving the small traders and hoteliers of their livelihood with the help of the bureaucracy to exploit the community.

Mr Baig was one of the few people in AKDN who used to raise voice against this on all levels and they had been trying to get him out of their way for quite some time.

Take a look at the Baltit Fort Museum. All of its revenues are swallowed by the elite mercantile class and the community of Karimabad receives nothing. On the other hand, more than 150 people earn their livelihoods from Altit Fort Complex and Ciqam while the community also gets a financial share.

These observations are based on my firsthand information and experience while working as an intern at AKCSP last summer and my frequent visits to the Complex and Ciqam.

I noticed and heard the venom and hatred for Ciqam from some patriarchal tribal mindset upper middle-class elements of the surrounding community who deem the project a threat to their “honor” and instigating young people to spread poisonous propaganda against it and harassment of the female workers. That’s what patriarchy does.

The business tycoons from Karachi since day one have created their hegemony and monopoly in the AKDN through nepotism and corruption, misusing the regional councils to target progressive and pro-people employees in AKDN.

It is need of the hour to question and debate the role of a certain class and their hegemony in institutions which have literally crippled the social and political life of the communities of Gilgit-Baltistan and Chitral (GBC) making their minds numb. Anyone criticizing them is immediately branded as an enemy of progress, religion and/or “an agent”. There is also a fear of being targeted among the communities due to the general security situation in the country, which is to some extent well founded. However, the elite class are doing immense harm not only to the Ismailis of GBC but also antagonizing other communities. So it is necessary to unmask them.

This is a wake-up call for the communities of GBC, as they are exploited in the name of development. There is a need for all communities of GBC to build real bridges among each other and resist the neoliberal capitalist agenda of hegemony.

In a mountainous area like Gilgit-Baltistan and Chitral, the land is a scarce resource. The indigenous people of GBC lack access to credit and other facilities for the purpose of using their land for entrepreneurial purposes. The outsiders use their contacts and influence local so-called community leader and use them as frontmen for land purchases. It is not uncommon for this unholy money-faith nexus to create discord between local communities and antagonise them in the region. Through conspiracy theories, they instill fear among the people. The large-scale purchases of land by owners of PC hotel in Mominabad village, Zuraiz Lashari on the lakeside of Ayeenabad and a businessman from Karachi for building a hotel in Sost, have been procured through their influence on the institutions.

The issue of land is nothing less than an existential threat to the locals of GBC. Therefore, this process of “accumulation through dispossession”, and commodification of the poor under the garb of religion should be resisted and debunked if we want to maintain our egalitarian society and identity and pro-poor development in the region. One of the keys is to break the capitalist hegemony of Khojas and outsiders over the institutions and resources.

Haider Ali is a student of Sociology at Forman Christian College, Lahore. He is interested in development, tourism studies and political anthropology in the context of Gilgit-Baltistan and Chitral. He can be contacted at: [email protected]