January 26, 2022
Editor-in-Chief: Farman Ali
Home Afghanistan The Pamirian Languages: Between Past and Future

The case of the Shughni language

The Pamirian languages are spoken by people in Tajikistan, Afghanistan, Gilgit-Baltistan and Chitral regions of Pakistan as well as Xinjiang province of China.

The Pamirian Languages — a linguistic term — has been employed even before the advent of the Soviet Union, the first socialist state, by one of the pioneers of Pamir studies I.I. Zarubin.

Most of these languages are considered endangered facing extinction due to globalisation, state apathy, discrimination and marginalisation. However, substantial research work is still being done by scholars and linguists in Central Asian republics, Russia and other European countries.

A new research article, titled The Pamirian Languages: Between Past and Future –The Case of Shughni Language has been written by Kalandarov Tohir Safarbekovich, a senior research fellow at the Institute of Ethnology and Anthropology, Russian Academy of Sciences.

The 30-page article published by the University of Central Asia’s Cultural Heritage and Humanities Unit (CHHU), consists of two parts, which present the history and the formation of peculiarities in the Pamirian languages during the socialist Soviet Union and post-Soviet periods.

The research paper examines the state of the Pamirian languages based on the example of the Shughni language during and the post-Soviet times of Tajikistan.

“Despite the significant progress achieved in this area, still much work needs to be done to preserve the Pamirian languages,” noted Mr Tohir.

“One of the priorities is to state the presence of these languages during the upcoming population census in Tajikistan in 2020,” the author suggests.

“The history of systematic studying of the Pamirian languages,” according to the author, “is rich and marked by names of outstanding scientists. It originated in the second half of the 19th century when K.G. Zaleman and R. Shaw published their research on the Shughni, Wakhi and Sarikoli languages (Zaleman 1895; Shaw 1876).”

Since the historiography of Pamirian languages’ studies is not the focus of this article, he explains and says “interested readers are best directed to the works of D.I. Edelman, T.N. Pakhalina, D.K. Karamshoev, L.R. Dodikhudoeva, and G. Morgenstierne, which contain historiography and bibliography of this area.” 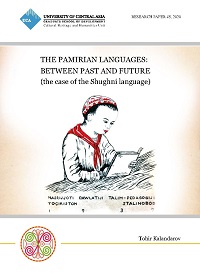 The article discusses the spread of the Pamirian languages in the form of the Iranian languages schematic map.

The article is based on an analysis of rare Shughni books, published in the 1930s, and modern literature on endangered and unwritten languages, as well as the results of field researches that were conducted in September 2016 and August 2019, mainly in Khorog city, Shughnan and Roshtkalin districts of the GBAO.

The methodology of the fieldwork consisted of participant observation — the author is a native speaker of the Shughni language — and transcripts of interviews with key informants – activists of civil society, poets, who write in the Pamirian languages, and regular native speakers.

Additionally, in preparing the article, the author has monitored social media platforms to search for poems, posted by accounts of speakers of the Pamirian languages.

The author’s scientific interests also include migration from Tajikistan to Russia, problems of adaptation and integration of migrant Tajiks.

Mr Tohir has authored a book Shugnani (a historical-ethnographic research 2004); and co-authored Journey Into The Land of Ruby Mountains. (2006) with V. P. Terehov) and written dozens of scientific articles.

In Central Asia, the art of jewellery is far from forgotten. Across the region, jewellers …