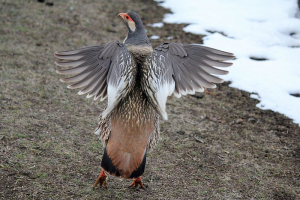 A study on the little-known high-altitude bird in the pheasant family, the Tibetan Snowcock. The study uses reports on images from camera traps to describe its behavior. It also describes the bird’s preference for higher elevation, living close to glaciers and the snow line.

“Global climate change has had significant effects on animal distribution and population dynamics in mid-latitude alpine areas, but we know little about the basic ecology of high-altitude species due to the difficulties of conducting field research in the harsh climate and habitat present at high elevations. The Tibetan Snowcock (Tetraogallus tibetanus) is a little-known phasianid distributing in alpine areas at extremely high elevations in the mountains surrounding the Tibetan Plateau. Estimating the species occupancy rate and discussing the factors affecting its distribution based on infrared-triggered camera techniques would provide both a baseline to measure the influence of global warming and valuable information on its conservation and ecology.”