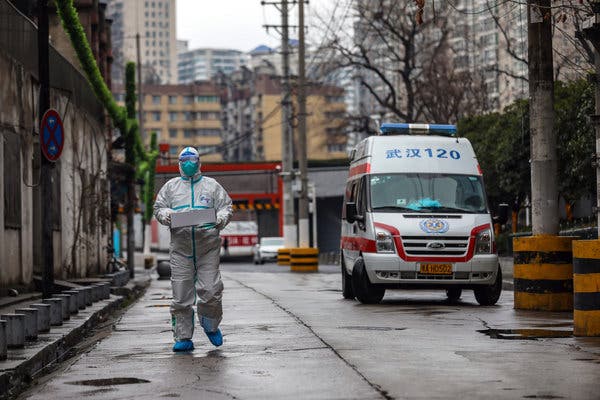 Five cases of the mysterious Wuhan coronavirus have been confirmed in the United States, giving rise to concerns about a potential global pandemic. We’ve seen this story before, as health authorities working with threadbare data try to walk the line between epidemic readiness and needless panic. Is this new outbreak poised to become the next AIDS pandemic or a new SARS, which was stopped in its tracks after 774 deaths? To cut through the headlines, we can use a simple concept called the “epidemic triangle.” Employed by epidemiologists since the discipline’s earliest days, it is indispensable in predicting whether localized outbreaks will transform into full-blown epidemics.

The epidemic triangle is essentially an equation. It posits that every outbreak, regardless of its specific traits, is dependent on the interplay between three factors: the pathogen (the agent causing infection), the host (the organism at risk of infection) and the environment (the setting where the infections occur). Every single epidemic — be it the flu, cholera or even behavioral epidemics like drunken driving — is the result of a dynamic shift in one of these points of the epidemic triangle, which then causes a domino effect leading to a sudden explosion of new cases.

In one classic example of this phenomenon, we have an environmental shift to thank for the emergence of the global flu pandemic. In the mid-16th century, ducks were introduced to Chinese rice paddies to feed on the insects that were destroying crops. That meant ducks joined another common feature of Chinese farms: pigs. The duck’s unique biology makes it a generous reservoir for a vast number of viruses, while pigs are uncannily efficient at mixing different viruses together into new strains and passing them to humans. Breeding these two animals in proximity quickly led to the combination and transmission of new viral strains. Novel and highly virulent pathogens — hybrid pig-duck influenza strains — then crossed the species barrier and have been tormenting humanity ever since.

The family of coronaviruses (so-called because they resemble glowing crowns) that includes the new Wuhan strain is exceptionally challenging to control. Coronaviruses are responsible for the common cold, pneumonia, and bronchitis, but the coronavirus family is sprawling and includes deadlier outliers like Severe Acute Respiratory Syndrome and Middle East Respiratory Syndrome (MERS), which have fatality rates of up to 15 percent and 35 percent, respectively. The big question, then, is whether the Wuhan coronavirus is closer to the common cold or to SARS. While its case fatality rate is unknown, as of Wednesday there were more 6,000 confirmed cases worldwide (with about 80 outside of mainland China) and at least 130 people dead.

Last week, the World Health Organization convened a special committee to decide whether to declare a global health emergency. Ultimately, after two days of deliberation, the group decided not to take this major step, though the W.H.O.’s director-general, Dr Tedros Adhanom Ghebreyesus, noted ominously that “it may yet become one.” That time may have come: Today, the W.H.O. committee will convene again to determine if the outbreak has crossed a threshold into warranting a designation of a global emergency. As it considers how to proceed, the W.H.O. committee is grappling with a monumental choice — global health emergencies are legally binding announcements requiring every United Nations member state to take action — with scant data.

I don’t doubt that the epidemic triangle is critical in helping W.H.O. navigate this process. Is this outbreak because of a substantive shift in the genetic makeup of an old pathogen, a change in the vulnerability of the host population or alteration of the environment that has shaped the threat emanating from Wuhan? As the Wuhan outbreak continues to expand, applying the calculus of the epidemic triangle remains the most reliable way to chart an effective public health response while avoiding a descent into hysteria.

First, we need to know how much of a shift this new pathogen is from previous coronavirus strains, based on its infective potential and virulence. Judging from the rapid rise in cases since the first cluster was reported on Dec. 31, the new Wuhan strain could very well be highly infective. For perspective, SARS has a relatively low basic reproductive ratio (or R0) of 0.5, meaning that every two cases of SARS results in only one additional infection. Very early estimates shared by the W.H.O. suggest the Wuhan strain’s R0 is 1.4 to 2.5, producing roughly two secondary cases for each initial infection, which places it slightly higher than the seasonal flu (for perspective, measles has a R0 of 12 to 18).

If the new coronavirus’s R0 remains low as more data become available, we can be relatively confident that surveillance and quarantine will stem its spread, though these measures become steadily less effective as the R0 increases. With respect to its virulence, early genomic sequencing of the Wuhan virus suggests, thankfully, that it is only distantly related to SARS (they are only 73 percent identical), meaning that it is likely to be less deadly, though it is too early to say with confidence.

Second, we have to ask how this outbreak might be explained by a shift in the vulnerability of its host (human beings). What scientists will be looking for here is an indication that those who have died are older or immune-compromised, consistent with the fatalities we see from other common coronavirus infections.

That leaves the environment, the last point of the epidemic triangle — and this is where things get complicated. As China’s economy has expanded, the number of Chinese citizens taking to the skies has risen astronomically. Much has been made about this week’s Lunar New Year celebration, and rightly so: it is the world’s largest human migration, with as many as three billion planned trips by car, train and plane within China over a two-week period. The challenges of quarantining during this migration are staggering, though China is better equipped than most countries to carry out draconian public health measures, and has demonstrated its resolve by imposing a lockdown on travel for — at last count — more than 50 million of its citizens.

Where the environment has truly shifted, though, is in China’s connections to the rest of the world. In 2005, two years after the first SARS outbreak, there were only 233 international air routes from mainland China. By 2016, international routes had more than tripled to 739, meaning there were far more routes for the virus to take out of the country. During the same period, the number of international air passengers traveling in and out of China exploded from around three million to over 51 million. In short, China’s increasingly outward-facing stance has greatly expanded the environment within which the Wuhan coronavirus can propagate. This, among all three of the points of the epidemic triangle, makes predicting the scope of the current outbreak exceedingly complex.

As we face new epidemic threats, no matter what their origin, we can rely on one constant: Each will ultimately be explained by the interaction of the three points of the epidemic triangle. In the case of the Wuhan coronavirus, what should trouble us the most is the rapid expansion of the environment across which the pathogen can infect its hosts, which maps neatly over China’s emergence as a global superpower. It remains to be seen whether the scale of this change is enough to transform it from a SARS-like scare — a blip in epidemic history — and into the next Spanish flu.

Dan Werb is the author of “City of Omens: A Search for the Missing Women of the Borderlands,” an assistant professor in the division of infectious diseases and global public health at the University of California, San Diego, and the director of the Center on Drug Policy Evaluation.