An American trophy hunter has sparked outrage after reportedly paying $110,000 for a permit to kill a rare mountain goat in Pakistan, before posing with the dead animal after the hunt.

A video posted to social media shows Bryan Kinsel Harlan climbing through mountains in Pakistan’s northern Gilgit region, before shooting at the goat, high-fiving with guides and then pulling the animal up by its horns.

The photograph, published last week in Pakistani newspapers, was stunning. It showed a magnificent mountain goat, with huge, symmetrically spiral horns, nestled on a rock and surrounded by breathtaking snowy mountains, with a man kneeling and smiling behind it.

It took a few seconds to realize that the animal, a wild Astore markhor, was dead. The caption described the man as an American hunter who had paid a record $110,000 to shoot it on a tourist expedition to Gilgit-Baltistan.

“It was an easy and close shot. I am pleased to take this trophy,” the hunter, identified as Bryan Kinsel Harlan, was quoted as saying. His home state or city was not identified, but his Pakistani guides said he is from Texas. Harlan could not be reached by The Washington Post for comment.

The story drew immediate expressions of sorrow and indignation on social media here. Some Pakistani commentators asked why there was no legal ban on hunting the markhor (Capra falconeri), which is the official national animal. Others suggested that foreign tourists be taken to photograph the exotic goats, not shoot them.

But there is another, more benign, rationale behind allowing Harlan, along with two other Americans, to pay enormous sums to kill three long-horned markhors in northern Pakistan in the past month. According to Pakistani officials and conservation groups, the practice has actually helped save a rare and endangered species from potential extinction.

For decades, the population of markhors, which are native to the Himalayan ranges of Pakistan, India and Afghanistan, has been dwindling, the result of local poaching for meat, deforestation and logging, military activities, competition with livestock and uncontrolled domestic trophy hunting for their splendid horns. By 2011, there were only an estimated 2,500 markhors left.

Several years ago, regional officials and conservationists began taking action to save them. India designated five sanctuaries for markhors in the mountainous border state of Jammu and Kashmir. Pakistan banned all local hunting but started allowing a small number of foreign hunters to shoot 12 male goats per season in “community conservation areas” in Gilgit and elsewhere.

American hunter Bryan Kinsel Harlan poses with an Astore markhor, a mountain goat found in the Himalayan ranges of Pakistan, India and Afghanistan, that he killed this month as part of a conservation program. Harlan paid $110,000 to shoot the goat, with the funds to be distributed to impoverished residents in the goats’ habitat areas. (Tabarak Ullah/Tabarak Ullah)

Most of the funds are supposed to be distributed to the impoverished, isolated residents in the goats’ mountainous habitat areas, which get 80 percent of the fee as well as income as hunting guides and hosts — all extra incentive not to poach the markhors. Government wildlife agencies get 20 percent.

The US Fish and Wildlife Service, in an effort to encourage U.S. trophy hunting of markhors as a conservation method, also reclassified the animal as “threatened,” rather than endangered, which allowed hunters to bring back trophies such as their horns, which can grow as long as five feet.

As a result, the markhor populace had rebounded enough by 2015 that the International Union for the Conservation of Nature upgraded the species from endangered to “near-threatened.” According to the conservationist website Green Global Travel, the comeback of the markhor is “one of the world’s great but little known conservation success stories.”

Pakistan has a mixed track record on protecting rare and endangered animals. Officials routinely allow parties of royals from Qatar and Saudi Arabia to shoot internationally protected birds called houbara bustards (chlamydotis undulata), which Pakistanis are banned from hunting. In 2014, a Saudi prince reportedly shot more than 2,000 bustards despite having a permit to kill just 100, creating an international uproar.

In Pakistan’s public zoos, neglect and disease have periodically led to the deaths of exotic animals. In the past four years, the main zoo in Islamabad has lost several zebras, lion cubs, an ostrich and deer. In the past month, four antelopes called ­nilgais have died of cold or infections. There are numerous private zoos in Pakistan, where wealthy people keep wild cats and other animals without supervision.

In some other countries, promoting trophy hunting as a conservation tactic has backfired, with some programs charging high fees but failing to regulate the hunts. The Tasmanian tiger was reportedly driven to extinction in its native Australia by intensive hunting that was rewarded with generous bounties.

But in Pakistan, the tactic seems to have been unusually successful. Tabarakullah, a professional hunter from Gilgit who has guided Harlan and other Americans, said the high-priced permit funds are used for local health and education as well as preserving species.

“This is not just about hunting,” Tabarakullah said in a telephone interview. “The number of animals is increasing, and these foreign hunters are millionaires who go back and tell the world that Pakistan is safe.” He noted that after the attacks of Sept. 11, 2001, foreign visits to Pakistan fell sharply. “Now, more and more tourists are coming.”

Harlan, for one, appears to see himself as participating in a conservation effort as well as an exotic escapade.

In a video recorded on his recent visit to Gilgit, Harlan was shown climbing a cliff, shooting a male markhor that was sitting next to a young goat, and then high-fiving his local guides.

In another, wearing a feathered local cap and robe, Harlan said he had been “welcomed with open arms” and encouraged other Americans to follow him, calling Pakistan a safe place for tourists. “This is a perfect example of hunters and villagers coming together for a common goal of game conservation,” he said.

On January 20, another American Diada Christopher Anthony had also hunted a record 48 inches long flared-horned (Astore) Markhor at Jutial Conservancy, 2km off capital city Gilgit.  This was the second hunt of the four markhor permits issued by the GB government for the current hunting season and 5th trophy hunt in Jutial Conservancy since the start of the community-based markhor conservation programme 15 years ago, said Mayor Khan, a consevatioinist.

Some officials of the GB Wildlife Department, parks and conservation managers consider “trophy hunting a form of ecotourism — which is low impact, but a high value activity”.

The hunter had paid $105,000 (Rs14.59 million) in an open auction to get the hunting permit. Eighty percent (80%) of the fee will go to the Jutial Wildlife Conservation and Social 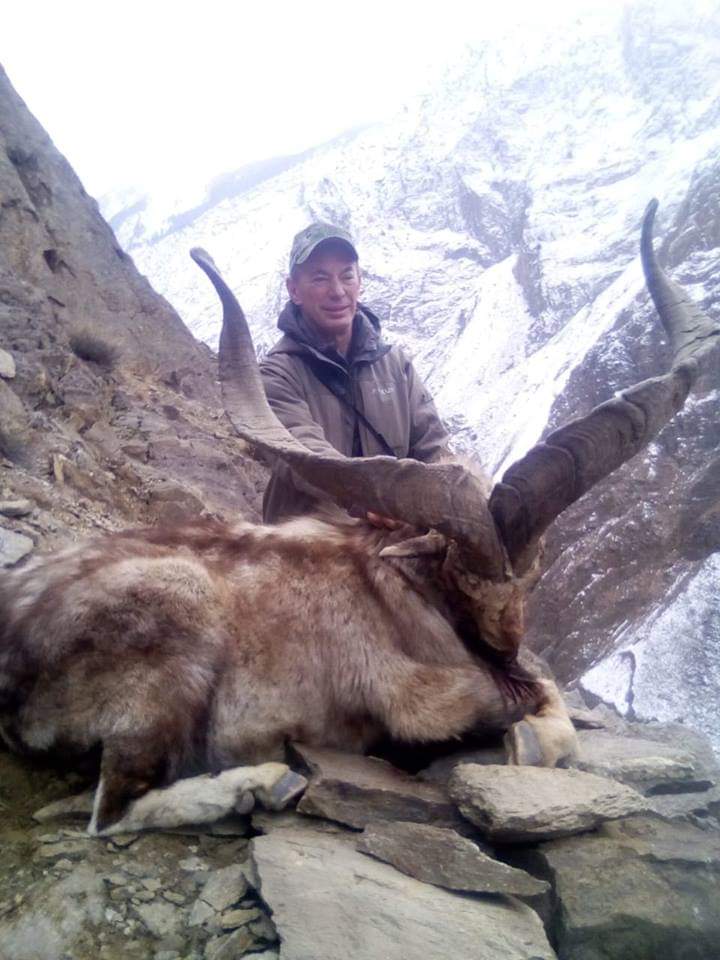 Development Organization, with technical support and guidance of the GB Parks and Wildlife Department and the Wildlife Conservation Society-Pakistan (WCS-Pakistan), said a statement issued by the organisation.

“We never thought that people of Jutial will ever be able to realize monetary benefits from use of our wildlife resources, said the Habibur Rehman, chairman of the Jutial community-based organisation. He attributed this to the WCS-Pakistan and the Wildlife Department for the technical support they have provided over last 15 years for conserving natural resources, he added.

According to a survey, conducted in January 2019 by the organisation 113 markhor, including six big trophy-size males were spotted in Jutial Conservancy showing an increase in markhor population, said Mayoor Khan, Country Programme Manager, WCS-Pakistan.

Jutial Conservancy in the Hindu Kush mountain range is home to several important wildlife species like snow leopard, markhor, musk deer, ibex, and woolly flying squirrel. The trophy hunting is not only paying for markhor conservation, but also for the protection of snow leopard. It is “trade off” for the community as it will contribute to livestock insurance scheme to mitigate livestock losses from snow leopard and help in promoting ecotourism in the Jutial Conservancy for which GB Government has already taken steps to encourage viewing wildlife and natural beauty in the vicinity of Gilgit city at half an hour distance from Gilgit Serena, said Raja Arif, DFO Wildlife Gilgit.

This feature was first published in the Washington Post, February 12, 2019.