Twenty-five years after the ratification of the Convention on Biological Diversity (CBD), we have seen many successes in conserving biodiversity in the Hindu Kush-Himalaya regions. Given new challenges, concerted conservation efforts must remain a priority.

196 countries to conserve earth’s biological diversity while ensuring it is used sustainably and thatthe benefits from using genetic resources are shared fairly.

All eight countries of the Hindu Kush-Himalaya (HKH) regions, from Afghanistan in the west to Myanmar in the east, are signatories to the convention. The HKH region hosts four biodiversity hotspots – the Himalaya, the Indo-Burma, the mountains of southeast China, and the mountains of Central  Asia – that are home to species such as the critically endangered Himalayan brown bear and the white-rumped vulture. Before 2000 there was significant biodiversity loss because of poaching, habitat loss, and unsustainable extraction of natural resources. This led to conservation action, which has resulted in noteworthy success stories.

The giant panda, Bengal tiger, and one-horned rhinoceros are some of the most famous species in the HKH. Their populations reached alarming lows by the 90s but recovered because of habitat conservation, stringent law enforcement to tackle poaching and illegal trade, and conservation outreach and education programs. The one-horned rhinoceros and giant panda were downgraded from “endangered” to “vulnerable” in 2008 and 2016.

While the Bengal tiger is still endangered, its population has increased significantly. Park officers, law enforcement, local communities, and conservation organizations, such as Project Tiger in India and Terai Arc Landscape in Nepal, have helped. Bhutan’s network of biological corridors linking nine protected areas allows tigers to traverse from lowland forests to high altitudes above 4,000 meters.

Local communities as agents of change

Women and men in the HKH benefit from biodiversity, through food, medicine, shelter, forage, clothing, and ecosystem services. For instance, Vaidyas and Amchis use herbs and animals parts to prepare medicines for several types of ailments.

More than a third of the total land in the HKH is protected. But conservation works best when local communities are involved. Buffer zones and conservation areas in the region’s 488 protected areas engage local women and men in conservation. For example, there are community snow leopard rangers in Pakistan, Himal Rakshaks in Sikkim-India, and community-based anti-poaching units in Nepal’s Terai. 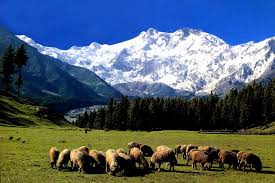 Biodiversity-based tourism is a major source of income in many parts of the HKH. Several thousand tourists come every year to the region to see Band-e-Amir National Park in Afghanistan, Inle Lake with its stilt houses and floating gardens in Myanmar, China’s Hongyuan Grassland, India’s Valley of Flowers in Uttarakhand State, the naturally dammed lakes and black-necked cranes in Bhutan, the markhor in Pakistan, and the one-horned rhino in Nepal. Biodiversity and local communities benefit from tourism income in protected areas: tourism generates cash for local communities and park fees are ploughed back for biodiversity conservation and community development.

Local communities are now benefiting further from the use of genetic resources through the CBD’s Access and Benefit Sharing (ABS) Bill, which acknowledges the right of indigenous people over their biological resources and traditional knowledge. Seven of the eight HKH member countries have signed the bill, and six have ratified it.

New challenges in the coming decades

The past 25 years of biodiversity conservation have produced several success stories. Governments, law enforcement agencies, communities, conservation organizations and the private sector have all played an important role. The coming decades, however, will pose new challenges. For instance, the increasing human population and decreasing wildlife habitats will cause more conflict between the two.

The Intergovernmental Science-Policy Platform on Biodiversity and Ecosystem Services (IPBES) has recently identified pressing issues for Asia and the Pacific, which includes the HKH region. Invasive alien species, climate change and associated extreme events, and increasing waste and pollution are driving biodiversity loss. Biodiversity is extremely important for livelihoods and sustainable development in the HKH region, and collective efforts for its conservation will continue to be a priority in the coming years.