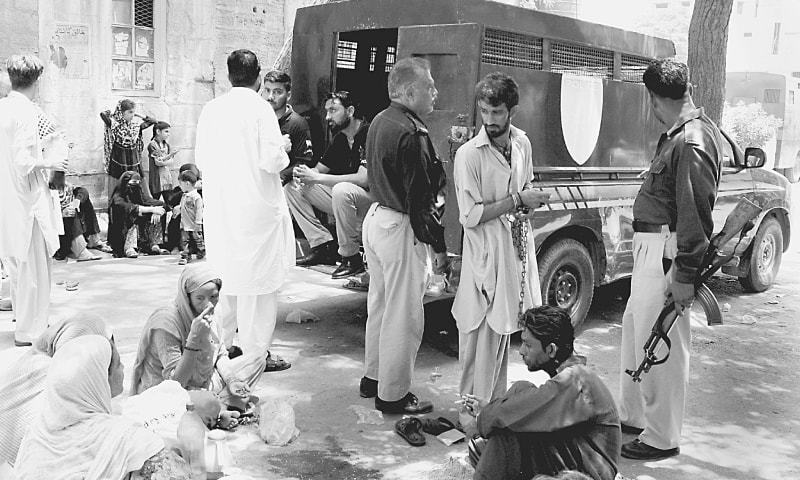 Police in Pakistan has gained notoriety for their misuse of authority, corrupt practices, brutality, highhandedness, and violence against the working class and hapless people. The Punjab police have become a symbol of fear and brutality which is evident from the rising number of complaints against the force.

People, mostly from far-flung areas like Fata and Gilgit-Baltistan, fall prey to not only the police brutality in Karachi, Lahore, Rawalpindi and other cities but also become victims of ethnic, sectarian, and racial bias.

Two incidents that became rallying points for protest against police repression and ethnic hatred were: the killing of Naqeebullah in a fake encounter in Karachi and brutal murder of a youth from Baltistan at Lahore after an altercation with a group of influential youth over cricket last month.

Arrests of and violence against the youth from the two regions has risen alarmingly under the garb of operation against terrorists, extremists and criminals.

The irony of the fact is that criminals escape police net and roam freely while the innocent people who could not grease the palm of the law enforcers are arrested.

For instance, the Rawalpindi police on February 25 raided Rawal Boys’ hostel on Saidpur Road near Pindora and detained dozens of students on frivolous charges of kite-flying. The police claimed to have seized 50 kites and strings from the hostel.

In the FIR the police mentioned the place of arrest near Holy Family Hospital.

Some of the students told The High Asia Herald that the police action is nothing but an aim to harassing the GB students. They said that it has become norm of the day to harass GB students under the garb of random security checks in Rawalpindi and Islamabad.

The students asked the City Police Officer (CPO), Regional Police chief (RPO) of the city to take action the rogue police personnel and stop harassing the students of GB and other areas.

They also asked the GB government to take up the issue with the Punjab government and ensure the safety of the students who are residing in Rawalpindi, Lahore and other cities for pursuing their academic and employment goals as there are no sufficient and quality educational facilities in the mountain region and job opportunities either.

Last week two students from GB were injured mercilessly in an attack by unknown miscreants outside their tuition centre in Rawalpindi.

The report of the incident was lodged in the Satellite Town Police Station but no arrests have been made yet.

The Punjab government’s decision to establish an independent police complaints authority has not been implemented yet. This could be gauged from the fact that the office of the IGP in 2017 received 10,253 complaints for the non-registration of FIRs, 4,540 for inefficiency, 1,771 for faulty investigations, 1,283 for the registration of false cases; 861 for seeking bribes; 269 for arresting innocent persons; 153 for illegal detentions; and 5,333 miscellaneous complaints. These are reflective of the malaise afflicting the police system.

The Islamabad police are no exception. Such incidents reportedly occur in the capital, frequently, despite the fact that the new police chief, who is considered to be an upright officer, has introduced a number of reforms in the capital police department

Week some students from Ghizer District were picked up by the Islamabad police without any charges. They were intercepted by the police while they were on way to a hotel to have a cup of tea at Karachi Company G-9 Markaz. The police sought their identity cards and asked them to sit in their mobile van and took them to G-11 PS at 7pm. They were hauled merely on suspicion as they resemble some suspects who had snatched valuables from a Chinese woman.

Upon hearing the news, the High Asia Herald reporter reached the PS and enquired from one of the police constables about the “crime” of the youth. He did not speak. There were over 50 other people at the PS, mostly jobless daily-wage Pakhtun labourers, who were also detained for their fair complexion. They were sitting on a roadside for the lady luck to smile on them and they get any petty work.

The police after initial questions asked them to arrange personal guarantors to sign documents and submit Rs10,000 surety bond to buy their freedom. How the jobless workers can be expected to arrange such a huge amount.

One of them was a youth who works in Metro Departmental Store late last night and kept in the PS without any food for 12 hours. He was heading home after duty when the police nabbed him. He was unable to inform his family members and was upset.

The police culture is reflective of the rotten exploitative system of governance, state repression on the working class. Although the judges of the superior courts and the legislators claim of introducing reforms in the criminal justice system, no one seems to be serious to implement the reforms.