The UN human rights office on Monday blasted India and Pakistan for failing to improve the situation in the contested Kashmir and Gilgit-Baltistan, while renewing calls for an international probe into violations in the disputed Himalayan region.

Last year, the Office of the High Commission on Human Rights (OHCHR) had released its first-ever report on Kashmir, documenting violation of human rights and wrongdoing by both sides and urging action to reduce longstanding tensions.

In a follow-up report released on Monday (July 8), the Office said: “neither India nor Pakistan have taken any concrete steps to address the numerous concerns raised”.

In Indian-occupied Kashmir, “accountability for violations committed by members of the Indian security forces remains virtually non-existent”, the report said.

The United Nations also flagged a spike in hate crimes against Kashmiris in the rest of India following the February attacks, calling on India to do more to prevent the violence.

In its response to OHCHR’s observations in the June 2018 report, Pakistan Government had maintained that the constitutional and legal structures of Azad Jammu and Kashmir and Gilgit-Baltistan adequately protect the rights of its citizens.

However, OHCHR’s monitoring and analysis found that these concerns remain unaddressed. Both regions (AJK & GB) introduced constitutional changes, but failed to address the main elements that restrict the full enjoyment of all human rights for people living in these regions.

Pakistan’s Foreign Office again welcomed the OHCHR’s recommendation for the establishment of a Commission of Inquiry (COI) to investigate the “gross and systematic human rights violations” in Indian-administered Kashmir.

Given the alleged failure of both states to address the issues raised, the updated report calls on the UN Human Rights Council to again consider undertaking “a comprehensive, independent international investigation into allegations of human rights violations in Kashmir”.

The report highlighted that the Interim Constitution of AJK placed several restrictions on anyone criticizing the region’s accession to Pakistan, in contravention of Pakistan’s commitments to uphold the rights to freedoms of expression and opinion, assembly and association.

However, the amended Interim Constitution of 2018 has retained the clauses that directly contravene international human rights law. AJK’s electoral law has not been amended, and it continues to disqualify anyone running for elected office who does not sign a declaration.

Authorities in Gilgit-Baltistan also failed to amend similar provisions in the region’s governance rules that restrict the rights to freedoms of expression and opinion, assembly and association. The GB Order 2018 and the updated Governance Reforms 2019 retain the same language limiting freedom of association prompting protests in GB by political parties, and civil society organizations with demands for full democratic rights and representation.

The report says unlike AJK and Indian-held Kashmir, GB does not have a law that reserves the right to own land only to its permanent residents.

The Human Rights Commission of Pakistan (HRCP) criticised the GB Order 2018 for failing to protect the fundamental freedoms of the people saying, “[I]n claiming to grant the people of [Gilgit-Baltistan] their fundamental freedoms, the Order has clipped their right to freedom of association and expression. It has denied any Gilgit-Baltistani the right to become a chief judge of the Supreme Appellate Court or to have any say in internal security. Above all, it has disregarded people’s needs despite continual public pressure to address their problems fairly and in accordance with local aspirations.”

In a letter sent to President Arif Alvi, the HRCP reiterated its earlier observation that the Order 2018 was a step backward as compared to the Empowerment and Self-Governance Order 2009. 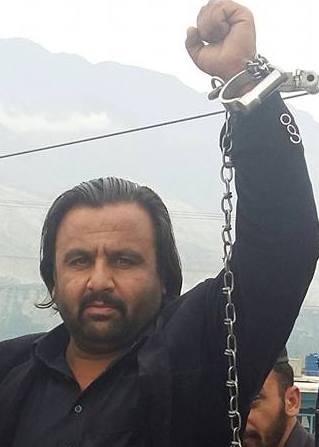 Members of nationalist and pro-independence political parties claim that they regularly face threats, intimidation and even arrests for their political activities from local authorities or intelligence agencies. They said often threats are also directed at their family members including children.

In November last, 19 activists of the Jammu and Kashmir Liberation Front (JKLF) were charged with “treason” for organising a rally in Kotli. The protesters had raised slogans calling on India and Pakistan to demilitarise Kashmir. On 15th March 2019, 30 members of the Jammu Kashmir National Students Federation (JKNSF) were detained by Pakistani law enforcement agencies while protesting at press club in Rawalpindi.
The OHCHR says authorities in GB continue to use the Anti-Terrorism Act, 1997 (ATA) and cybercrimes act to target political, social and human rights activists. Authorities frequently clamp down on any dissent with the ATA and the 2016 cybercrimes law.
The ATA is misused by GB authorities especially after the introduction of National Action Plan for countering terrorism and extremism in December 2014. The report also indicated concerns raised by the Human Rights Committee and the Committee against Torture.

Prominent [Leftist] political activist Baba Jan and 11 other protesters who were prosecuted under ATA for their environmental activism in September 2011 are serving a prison sentence of 40 years and activists believe they have only narrow legal recourse available to challenge false charges against them.

Anyone who protests is termed as “anti-national and anti-people and often accused of being Indian spies in order to delegitimize their concerns and protests.

OHCHR recommended to Pakistan to fully respect international human rights law obligations, end the misuse of ATA to persecute those engaging in peaceful political and civil activities and expressions of dissent

In a joint communication to the Pakistan government, a group of Special Procedures mandate holders observed, “[I]t appears that ATA has effectively created a parallel system of unique and exceptional procedures from arrest to custody, detention, prosecution, and sentencing of terrorism suspects by authorizing measures such as the denial of bail, enhanced police powers, arrest without warrant, and extended remand of suspects for up to 30 days, thereby increasing the risk of torture as a means of extracting confessions in police or other law-enforcement’s or security forces’ custody.”

OHCHR recommends to the UN Human Rights Council to consider the findings of this report, including the possible establishment of a commission of inquiry to conduct a comprehensive independent international investigation into allegations of human rights violations in Kashmir.

The Office also recommends immediately release of political activists, journalists and other civil society actors who have been convicted for peacefully expressing their opinions.

The federal and local authorities should amend the constitutions of AJK and GB to abolish blasphemy provisions to facilitate the enjoyment of freedom of religion and belief by all people.

The report also recommends to the GB authorities to ensure that indigenous and local communities of AJK and GB are consulted to give their informed consent for the use of their land or natural resources for any kind of non-local business activities.

Journalists continue to face threats and harassment in the course of carrying out their professional duties.

On 21st November 2018, GB authorities arrested journalist Qasim Qasimi after he engaged in a verbal argument with a local police official.

According to Committee to Protect Journalists (CPJ), Qasimi has been charged with “criminal intimidation, intentional insult with intent to provoke breach of peace, defamation, the threat of injury to a public servant, and obstructing a public servant in discharge of public functions.”

Such intense pressure has reportedly forced many to either flee Pakistan and continue their political activities in exile or stop them completely.

According to journalists working in AJK and GB, media houses continue to practice self-censorship as a means of avoiding harassment.

A key concern in both AJK and GB is that the local communities do not control natural resources of the territories as these are controlled by federal agencies. Political leaders and activists feel their natural resources are exploited for the benefit of Pakistan while the people of AJK and GB continue to remain largely impoverished.

While CPEC has raised expectations of bringing development to an impoverished region, civil society groups say the initial optimism has been replaced by disappointment and a sense of outrage.

According to ICG, the people of Gilgit-Baltistan are resentful because they feel CPEC projects were “designed and implemented without their input” and “will be of little benefit to them”. Environmental activists and local communities have also raised concerns about the ecological impact of large-scale infrastructure projects.

In addition, according to the United Nations Guiding Principles on Business and Human Rights, “business enterprises have an independent responsibility to respect human rights and that in order to do so they are required to exercise human rights due diligence.”