Islamabad: Residents of Yasin Valley, mostly youth and students residing in the twin cities of Islamabad and Rawalpindi, converged at the open air theatre of Lok Virsa on Sunday to celebrate their rich culture, art, and unique but endangered language ‘Burushaski’.

The indigenous language is spoken over 150,000 people in Yasin, Nagar, and Hunza.

“Burushaski is the unique language on this planet earth which has amazed researchers and linguists around the globe’, social worker and educationist Jan Madad said in his address.

“There are thousands of language families which are linked to each other one way or the other, but researchers and linguists have not yet traced Burushaski’s family and its origin,” he added.

He appreciated the efforts of organisers and hoped that similar programmes will be organized in the future as well.
He stressed the need for working on cultural tourism which according to him “will not only help us to promote our indigenous culture but also boost our economy. 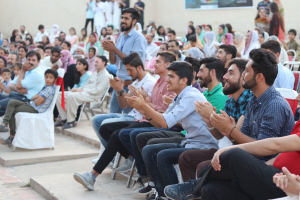 The event aimed at fostering efforts to preserve Burushaski language and to pay tribute to late Basharat Shafi and late Fehmida, two bright minds from Yasin valley who left for their abode in their prime age.
Basharat is considered as the pioneer of modern Burushaski poetry, died in a tragic road accident on way from Hyderabad to Karachi.
His poetry left an indelible mark in society and inspired youth. Fehmida was an active member of Yasin Arts Council and died in her prime age. Her theatre was presented at the event which was highly praised by the audience.

Noted artists including Riaz Saqi, Ali Ahmed, Mushtaq, Saa Gari, Asif Happy, and others enthralled the crowd through their performances. People kept dancing to the popular and folk tunes played by the local musical band.