September 29, 2022
Editor-in-Chief: Farman Ali
Home Health Ventilators or testing suspects: what is the need of the hour? 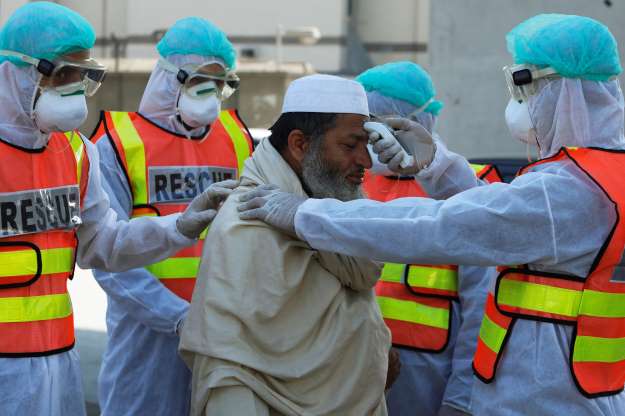 The pandemic-turned-catastrophe has hit the world in less than three months, which nobody was expecting when it first erupted in China’s Wuhan city of Hubei province in December 2019. The global health system was not prepared enough to face the challenge. The cases were curtailed at Wuhan. However, the world remained busy in stitching conspiracy theories rather than executing any interventions to contain the spread. Hence, within a blink of an eye, the US and Italy have turned epicenters of the disease. The US, the world superpower: Italy, the nation of Roman Dynasty, the British Empire, the French Dynasty, even the great walls of Berlin, economic giant Germany: everyone has been challenged and weakened by this invisible strain.

Pakistan stands at 105/195 countries with a 35.5 index score for the global health security index (GHSI) score. This score shows the level of preparation of Pakistan to handle such a global pandemic. We stand 7th among atomic powers and 105th in the public health perspective, which clearly indicates our priorities as a nation.

Now, the pandemic has reached to its peak, decisions within the prevailing resources and capacities are necessary for the survival of the nation and its people. The government thus should not take an adventurous decision in such a situation to win the credit and/or political gain. Politics should be kept aside and armed forces should step forward to help take patients at their CMH hospitals and MH hospitals. All other private and semi-private hospitals should also take the initiative and start working on operational cost formulae and charge patient amount which will run their system in a sustainable way. Profit-making could be thought after the pandemic is curtailed.

At the national level, the race must be to test more patients rather than searching for ventilators and ordering more ventilators. Setting up mobile ICU units is not going to benefit the nation on a large scale, rather its resource consuming and less cost-effective strategy. This will benefit only the critically-ill population. However, working on demand-side and testing more will benefit large scale populations and would act as a cost-effective strategy.

Nevertheless, if ventilators are imported than it also requires a technical squad, an intensivist, anesthetist and an ICU specialist Nurse to operate as and do the necessary management. So it’s not that simple proposition. We have scarce resources and it would be a high-risk adventure if the government of Pakistan remains sticks to this policy of importing more of ICU and high tech equipment to control the pandemic.

On the other hand, the government should seriously think of increasing testing facilities, kits, and human resources to reach at least 40k testing of suspected patients on a daily basis. The South Korean approach to reach millions in no time to isolate the population from cases to bring the number to least in such a short period of time could be followed. The more we conduct the test, the more easily we will quarantine them and spread could be minimized.

Our focus should be to ultimately decrease the risk factors of death and this only possible if we curtail the spread of the disease. Even the US and Europe have failed to respond to the pandemic while it turned out of control when they tried to cater to it at the tertiary level rather than at the primary level. They seemed confident on the basis of their resources and took it not that serious and thus faced the highest number of deaths in these regions.

On the other hand, China worked on the basic principle of quarantining a patient and the result is remarkable. Pakistan cannot be able to take such an adventurous step with prevailing circumstances, that Italy or the US had taken.

Another best strategy could be to map the number of cases and suspects to identify the rise of disease load of indigenous cases epidemiologically (john Snow Model).  The Map will let us know the disease spread pattern and the number of indigenous cases.  Also, the daily increase in cases to decide accordingly for intervening the graph in high-risk population more vigorously and vigilantly. If testing remains less as its happening now, it will not make any sense to decision-makers and delay would remain there in the decision-making process.

Third, delays give birth to 4th delay and it is disastrous. Delay in decision making, delay in seeking health care and delay in availability of health care will give birth to disaster in the country. It will be calamitous and if the prevention strategies are not been taken vigorously. Vigorous testing would only help the cause, suppressing the number of cases and not showing in numbers will not leave its capability of spreading to fellow human beings.

Finally, the spending should be more on personal protective equipment for doctors, nurses, technicians, technologists, FMD services staff and housekeeping staff to control the spread of infection and break the chain. This should be monitored nationally that each frontline worker is fully prepared to face the disease and assess the COVID-19 without any hesitancy.

In conclusion, adventurous efforts, winning credit, and political gains will not benefit anyone. Neither any institution needs to give any extra credit, nor political party. It’s our Pakistan and together we can save it from further calamity. Testing, testing, testing and quarantining, isolating patients from the public is key to success, along with the availability of PPEs on each hospital for our frontline warriors.

COVID-19 could only end when we seriously want it to end and is only possible by breaking the chain and decreasing the exposure of susceptible to the reservoir of COVID-19 in the environment. Break the chain of infection and COVID-19 is no more.

Sultan Karim is a health economist with expertise in outbreak management interventions. He was one of the members of the core team to control the world’s largest XDR typhoid outbreak in Pakistan from 2017-2019. He hails from Gilgit-Baltistan and writes regularly for High Asia Herald. He tweets @KarimG07