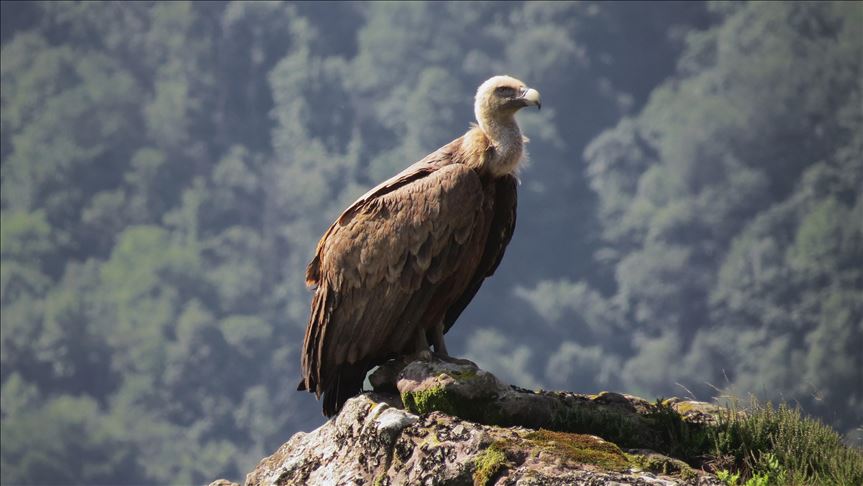 KARACHI: Once a prime candidate for extinction, the population of vultures in Pakistan has shown tentative signs of recovery in the past five years, but nature’s “garbage disposal” is still facing looming threats on several fronts, experts said.
The population of several species of vulture started declining in the mid-1990s due to the ingestion of livestock carcasses containing residues of deadly cattle drugs.
Apart from drugs, food shortages, and an increase in tree felling, especially those with vulture nests, have all been important contributors in the declining number of vultures.
The critically endangered oriental white-rumped vulture (Gyps bengalensis) and long-billed vulture (Gyps indicus) have declined across most of their range by over 95% since the mid-1990s, according to a recent report published by the Pakistan chapter of the World Wildlife Fund (WWF).
Tharparkar district, mainly the Thar desert, which borders India, hosts the largest population of vultures, followed by scattered spots in southern Punjab, Azad Jammu Kashmir (AJK), and the southwestern Balochistan province.
According to a 2016-17 survey conducted by the International Union for Conservation of Nature (IUCN), the population of vultures was found mainly in the Nagarparkar and Islamkot areas of Tharparkar and estimated between 500 and 600. A majority of vultures found in Pakistan are Egyptian vultures, followed by long-billed, white-rumped, and red-headed vultures.
The Sindh Wildlife Department in collaboration with the WWF established a Vulture Safe Zone in 2012, which covers an area of 100 kilometers in Nagarparkar to retain and increase the vulture population.
Ornithologists recently spotted hundreds of vultures along a water reservoir in Gorano in the Thar desert, raising hopes of saving the bird from extinction.
The reservoir was recently created using water pumped out from a coalfield.
In addition, 60 new vulture nests have also been identified in the Nagarparkar and Islamkot areas.
“We spotted a concentrated population of around 300 vultures along the reservoir in July, which has given us new clues for further research and investigation,” said Naveed Ali Soomro, head of the IUCN’s vulture conservation project.
However, Soomro said, something definitive about any increase in the bird population could be gauged after the coming breeding session next January.
“At this stage, we can’t say whether the birds gathered there [from other parts of the province] for water because it was a drought season. Things will be cleared up after the coming breeding session,” he said.
Soomro cited better road networks as a key reason behind food shortages, which eventually led to vultures’ migration to neighboring India.
“Until a few decades ago, vultures had had enough food to survive in areas like Thar. But the construction of roads has decreased the mortality rate of animals, as the locals either sell the ailing animals or take them to big cities for treatment,” he opined.
As a result, he went on to say, a sizable population of vultures has migrated to India, where a large number of old cows are left to die a natural death and subsequently to be eaten by vultures.
Cows are considered a sacred animal by millions of Hindus, and conflicts over cow slaughter in India often lead to mob lynching and communal riots.
“There are signs of improvement but yet we can’t declare the vulture population stabilized. It’s still under threat,” Soomro said.
The conservation union plans to establish another safe zone including three more areas in Tharparkar.
Uzma Khan, a Lahore-based analyst who often writes on the environment, partially agreed with Soomro.
“Despite some encouraging signs, we can’t say there is an increase in the vulture population. However, we can say it has stopped its decline,” Khan said.
“But more work needs to be done to protect this bird, which is essential to the environment,” she added.
The latest survey, Soomro said, found that despite a blanket ban on dangerous drugs, several drugs, particularly diclofenac (for anti-inflammatory treatment), were easily available for veterinary use due to low prices across the country.
Diclofenac, banned in South Asia in 2006, was used to treat ailing livestock, and when these carcasses were left out for vultures to scavenge, the birds died of kidney failure.
Other livestock drugs — such as Aceclofenac, Ketoprofen, and Flunixin — have also been shown to be unsafe for vultures.–Anadolu News Agency