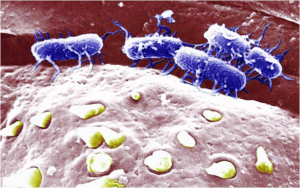 To give the reader an idea of the rise of the scale of this outbreak consider the following:

The intensity was initially high at Hyderabad, but due to mass vaccination with a new WHO-prequalified conjugate vaccine, it was managed much better. Karachi, the nearest metropolitan centre, is facing a far more intense outbreak right now and needs immediate treatment and preventive measures. In fact, even when 6 cases of extremely drug-resistant typhoid were reported from the USA and Northern Ireland, all of these cases have a travel/residence history traced to Pakistan!

It is Asian and African regions that are most commonly hit by typhoid. Poor sanitation, poor dietary and hygienic systems, poverty, and bad governance count as the common characteristics of these regions. Since typhoid is a disease of the poor, it could never get due attention in the global corporate health system.

The World Health Organization (WHO) in 2013 released a list of 17 diseases naming them as “neglected tropical diseases” (NTDs). These diseases are described as “neglected” because they generally afflict the global poor and have not received as much attention as other diseases historically. NTDs tend to hit the most vulnerable segments of already poorer populations – like children and women. WHO claims that more than one billion people suffer from at least one NTD.

Indeed, the occurrence of some NTDs has been suggested as an indicator of poverty itself. Although NTDs seldom lead to death, they can cause substantial disabilities that continue for a lifetime – including fatigue, blindness, and disfigurement. Subjects of the NTDs often miss school, perform poorly at work or are too embarrassed to seek medical care. And so it is that NTDs can underpin the cycle of poverty amongst the world’s underprivileged populations.

The healthcare sector in developing countries is majorly owned by the private sector, charging a hefty amount for the treatment of these diseases, thus decreasing the influx of sufferers to these hospitals. These people are found to be seeking traditional healers for treatment – which either causes mortality or multiplies the health cost at an individual level.

The effect of NTDs on the unpaid labour provided by women in the community is even harder to measure. Women in developing countries are more likely to get affected by NTDs due to their frequent contact with poor sanitation and other causal agents. Also, when women are ill, they are less able to do work such as growing vegetables, fetching water and fuel, providing care for older people and children and ensuring that family members wash their hands or wear shoes – which. Women tend to have poorer access to health care than men and are also excessively affected by NTDs.

While the problem of neglected tropical diseases has somewhat received much-needed attention in the past few years, there are still some diseases that are neglected within this category. Typhoid is on the top of the list. Even as far back as 2013, it was not included on the list issued by the WHO, though it fulfilled all the conditions for being classified as an NTD. 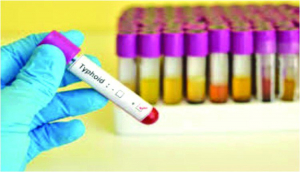 Typhoid is a life threatening infection caused by bacteria called Salmonella Typhi. It usually spreads through contaminated water and food. Once salmonella bacteria are eaten or drunk, they multiply and are spread into the bloodstream. It used to be treated with ordinary antibiotics but increasing resistance to different types of antibiotics is making the treatment more complicated and costly. WHO estimates that 11-20 million people get sick from typhoid and up to 200,000 people die of it every year. Urbanization and climate change hold the potential to increase the global burden of typhoid fever. Moreover, increasing resistance to antibiotic treatment is paving an easy way for typhoid to spread through congested populations and/or insufficient or flooded water and sanitation systems.

In democracies (as Pakistan claims to be one) the people and government tie up in a relationship defined by the constitution. People are responsible to obey laws and pay taxes, and in return the government is responsible for the well-being of its people. Unfortunately, in the case of Pakistan, the government has always failed its taxpayers. There is a certain class that enjoys proper sanitation, balanced and healthy diet, quality education, better services (private) and healthy working conditions. This class is at best some 10% of the total population of the country while the remaining 90% live in miserable anti-health conditions, becoming more vulnerable to the Neglected Tropical Diseases.

I believe the time has come that physicians, nurses, public health researchers, civil society organizations, students of all healthcare disciplines and all concerned citizens come together to lobby at different levels for a pro-people health charter – not only to make it a dead part of policy but to ensure its implementation in the grass roots. A qualitative, well-equipped and concerned public healthcare system is the only way out that can benefit “the many – not the few”.–Courtesy: The Friday Times

Anayat Baig is a Public Health researcher and activist.