Darel valley is noted in Gilgit-Baltistan for its power structure and culture where tribal leaders hold sway over individual villages. The neighbouring Tangir valley has also the same tribal system. But in past few years both valleys have undergone immense change. The transformation in their lifestyle is caused by migration and education.

A decade ago, it was hard to find a television in both the valleys, though there were radio sets. People detested these modern gadgets and did not let anyone purchase a TV. But now everyone holds mobile phones instead of guns – for the proliferation of which the valley was once notorious. In the last two decades many people have migrated to major cities of Pakistan – particularly to Karachi, Rawalpindi and Abbottabad. The migration has had a great impact on the material culture and tribal system of the valley. Some years ago, carrying weapons for security purposes was very common in the valley. It was commonly seen as a symbol of power and masculinity amongst Darelis. Not so, any longer.

The main factor in the decrease of the tribal feuds is migration and education. Educated people tend to avoid indulging in blood feuds. Now, these emigrants’ houses have modern home appliances.

Initially, local religious leaders made a great hue and cry against mass media penetrating into their society. They went so far as to declare it un-Islamic to watch anything on television. But emigrants did not pay heed to the rising campaign of the religious leaders against their bringing electronic appliances to the valley. They were unable to stop them and now the religious leaders themselves follow suit.

Many customs and practices have now died out in Darel valley due to this process of transformation. Two or three decades ago, people were using cutlery made from gourd and wood. Darelis used different kinds of gourds for drinking and storing grain. A “toki”, a large gourd, was used for drinking water, a “toke”, small gourd, for placing salt. “Huchi” and “Hucho” were huge gourds for storing milk and lassi respectively.

Many different things were made from animal hides. These included ropes and bags. Darelis used to make cords, locally called “Jikan” from the hides of buffaloes. The Jikan was used in making chairs. They also used these to made coats, socks and “thareegi” (used for churning milk to make butter and lassi).

Darelis made boots from the hides of sheep and goats, locally called “Thaoti”, which was worn by the shepherds (payalo). 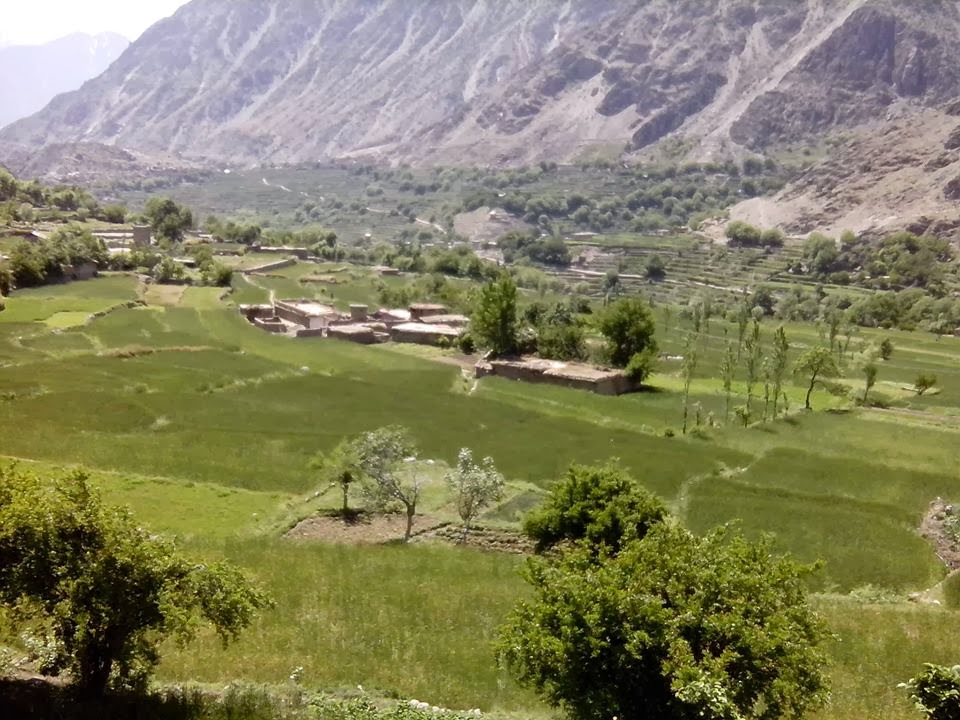 The dress of the typical Payalo was quite different from other people. He wore a Thaoti (long boots), choga, woolen dress and cap, He was armed with a club. Today, one finds some shepherds who only wear Thaoti and keep clubs and but no more woolen shalwar-kameez or chogas.

Some of the customs have also died out, of which Shahloro, Chappi ki Rasam, Qurmuqar, Regin, Karoos, Shoacho and Makook are noteworthy.

In the past when upper Darel received a first snowfall, people on that occasion used to bake a special bread locally called Shahloro. This sweet bread mixed with almonds was distributed amongst the relatives of both upper and lower parts of Darel, which was a kind of communication between relatives. Through the distribution of sweet bread those living in lower Darel used to know that upper Darel had received its first snowfall. Nowadays, this festival is celebrated no more.

There was a custom called Goshto or Nasalo, increasingly dying out, although it is not completely out of practice. When snowfall begins in upper Darel in the winter, its communication with lower Darel is disrupted and people are confined to their houses for weeks. During this time the begin storing vegetables and meat before the harsh winter season approaches. Locally, dried meat is known as Goshti or Nasalo. In order to store the meat, which is hung on a “dango”, a triangle-shaped store on the upper storey of a building is used. The Darelis slaughter their animals before the 21st of December, after which the valley receives heavy snowfall disrupting the communication with outer world completely. Some find it hard to eat this dried meat, but Darelis love it.

The Darelis store fodder for their animals before the winter sets in. They place the grass in a haystack over the chopped branches of trees. It is quite a sight to see a haystack placed over trees in almost every village in upper Darel.

Music was once non-existent in the valley and people detested musicians. Now, a positive thing has taken place and people have gradually accepted music and musician in their society. Once, shaving your beard was considered a sin in the valley and there was not a single barber’s shop in Darel. Now a few have opened in Gumari town, the headquarters of Darel valley. A majority of the young Darelis who live in Rawalpindi, Abbottabad, Karachi and other cities and towns of Pakistan are clean-shaven.

A majority of young Darelis have assimilated into open society of cities in Pakistan.

The Darel valley has great potential for tourism which will, without a doubt, only speed up the transformation already taking place.

Dr Zulfiqar Ali Kalhoro is an anthropologist and has authored four books: ‘Symbols in Stone: The Rock Art of Sindh’, ‘Perspectives on the art and architecture of Sindh’, ‘Memorial Stones: Tharparkar’ and ‘Archaeology, Religion and Art in Sindh’. He may be contacted at: [email protected]