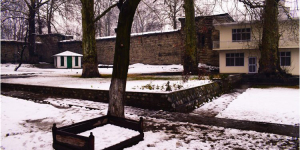 Even though I am based in Islamabad, during the winter I always spend at least a week to ten days in Chitral every other month, so as to see that my affairs run smoothly. This includes both paperwork as well as meetings with various members of my team and paying condolence visits – which sadly increase in number during the winter months. Our winters are harsh.

The past few winters had been quite mild and dry but this year we had a traditional snowy cold season with the first snowfall coming in December and continuing well into March. My residence in Chitral is my ancestral home, Chitral Fort. It is known as the Noghor in Khowar, and it makes for an interesting setting to spend a snow-clad winter in.

Let us begin with a bit about the history of the fort. Exactly when it was first built is unclear but the land upon which it stands had been under the possession of the old rulers of Chitral long before my forefathers took control in the late 1500s. Our own story is also an ancient one, which has become intertwined with legend. It is unclear whether we are the direct descendants of the ancient pre-Islamic Katoors who regained power in the 1500s following an interlude or whether our ancestor assumed the ancient title of Katoor (meaning “dragon”, by the way!) after seizing the throne. What is known, though, is that the first chinar trees surrounding what is now Chitral Fort were planted by Mehtar Muhammad Shafi in the early 1700s. By 1774 there was a fort at the site occupied by my great-great-great-great-great-grandfather Shah Mohtaram Shah Katoor II. 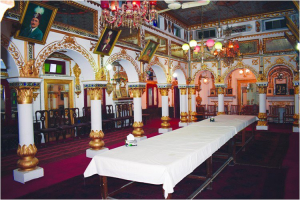 During the reign of his grandson Shah Aman-ul-Mulk, the fort was the capital of a kingdom ranging from Narai in the Kunar Valley to Sher Qilla just outside Gilgit. Subsequently it was the site of the Siege of Chitral in 1895 – following which Chitral came into the British sphere of influence as an Indian Princely State. The fort was greatly expanded by my great-great-grandfather His Highness Mehtar Shuja-ul-Mulk and the iconic Indo-Saracenic orange coloured state rooms – painted that way to mimic sandstone – were added by His Highness Mehtar Nasir-ul-Mulk just under a hundred years ago. Following the merger of Chitral State in 1969 and the subsequent de-recognization of the princely rulers of Pakistan in 1971, it is now just a grand old house, inhabited by yours truly!

I had reached Chitral from Islamabad in the middle of February. It had started to snow just as we reached the Lowari Tunnel. It was snowing heavily on the Chitral side, but as we descended into the valley it ceased. February is a time when, although the days have lengthened and the sun has gained some strength, the air is still very cold. So, snow is more common than rain. 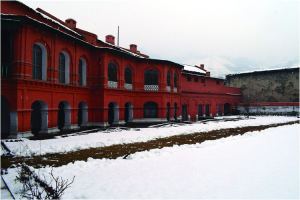 The rain started later that night in Chitral Town and by the following morning it had transitioned into sleet. After I left the warmth of the fireplace in my office to walk back to the residential portion that evening, I saw that the sleet had transformed into light flakes of snow.

The snowfall continued throughout the night and into the next day. As activities come to a halt when it snows, the snowy days are quite relaxing. I spend them either by the fireplace in my office or out on the verandah watching the snow fall. It was snowing until nightfall and then it transitioned back into sleet before ending around midnight.

The next few days were sunny and beautiful, although extremely cold – as, following the snow, temperatures had receded and the night time low had again dropped to minus 8 degrees Celsius and the daytime high was just above freezing. I took this period of good weather as an opportunity to cover all the social and condolence visits I had to attend, as I knew that once the clouds gathered again, I would be besieged in my fortress!

After the day’s business is conducted, and Asr prayers offered in our small mosque, my close confidants gather around the fireplace and the conversation varies from the Pakistani obsession of politics, to the type of jokes that are common in rural areas, and of course, the Chitrali favorite: the weather. 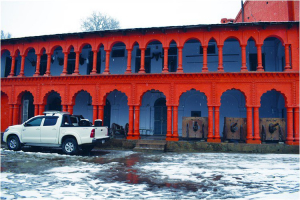 I am usually quite conscious about my diet. A few years ago I had been obese and now after having lost 25 kg, I am on my way to reaching my goal weight, but winters in Chitral are not times to be dieting. This tendency to indulge in Chitral, together with all the eating I do on my trips abroad, is why I haven’t reached my goal yet. There are few things more comforting then the traditional Dardic soups and breads and the mantus and palaos of our Northern neighbours on a cold winter’s night! It was on just such a night, after a meal of Chitrali kalli soup, karahi and roti that I went outside to see that it had started snowing again.

I had an important meeting with one of my lawyers the next day so I hoped that it would clear up by the afternoon. The many civil cases I have with the Federal and Provincial government as well as with opportunists who took advantage of the power vacuum of the 1970s and  claimed properties that they were tenants on are part of the legacy I have been left with. As a lawyer myself there are few things I find as disheartening as the state of our legal system and how it is subject to both prejudices and apathy.

I stayed up late that night, watching the snow. It was heavier than it had been the previous week and started to pile up fast. There is an absolute stillness that accompanies the snow, especially at night. The scientific reason for this is that the accumulating snow acts as a sort of insulation that blocks sound waves, much like a room that has been sound proofed, but nonetheless it leads to a magical atmosphere which, depending on one’s mood, can be anything from philosophical to beautiful to scary!

I woke up the following morning to see that the snow was still coming down heavily, so after my morning workout I put on my boots and went out to have a walk in the orchards outside the fort. I was accompanied by my secretary, Inspector (Rtd.) Nishaan-e-Haidar and our old Janduli watchman, Lala Sher Ali. The white covering makes open ground look vaster than it is and I enjoyed stomping around the whiteness while Nishaan talked of rental properties and agriculture. Afterwards we returned to the fort to check the old staterooms including the dining hall and Durbar room for leaks. Thankfully everything was in order.

Just as we returned from the walk the clouds started to part and the sun came out. The advocate sahib called and confirmed that he would be coming by and while I waited for him to arrive I sat on the verandah admiring the beauty of my homeland.

Chitral is indeed a wondrous land – something which we locals often take for granted and whether it be a cold day in February or a blazing hot one in July (Chitral often goes above forty degrees) there is much to please the senses. There are other places in Pakistan which boast of stunning mountain scenery and more stable weather but what makes Chitral distinct is the culture and traditions of a people who, despite living amongst the wildest mountains in the world and in area at the crossroads of empires, are among the most peaceloving and civilized peoples in the world. Our heritage of being a centre of civilization and a proud kingdom for over a thousand years is what has shaped our worldview, one that puts prosperity, enjoyment and stability above the baser sentiments which sadly govern the psyche of many groups in this region.

This is how I usually spend my winters in Chitral. In summer things are a bit faster paced as the warming temperatures lead to increased activities. As an introvert, though, I particularly enjoy the solitude that winter in the mountains brings. If you are ever in Chitral, please do come by to have a walk around the fort.

Upon reaching the main gate, please do enquire from Sher Ali whether I’m there and if so, I will invite you in for some tea. –Courtesy: The Friday Times