Zulfiqar Ali Kalhoro on the distinctive aesthetic to be found in Gojal valley, upper Hunza of Gilgit-Baltistan

The Wakhi are known for their distinctive way of life, music, traditional food and festivals. Tracing their origin to the Wakhan region, in the north-east of Afghanistan, this ethnic group now live in many remote valleys of Gilgit-Baltistan. In recent years many associations have been formed by the educated and young Wakhi people to preserve their culture and customs. From Upper Yarkhun valley in Chitral, Upper Yasin Valley and Imit village in Ghizer district to Gojal valley in Hunza, all the Wakhi populations are well known for their distinctive culture.

Gojal valley or upper Hunza is the main valley of the Wakhi where they are in a majority. Barring Misgar village, where Burusho people live, the entire valley of Gojal is a Wakhi-speaking region. The Wakhi people’s heritage, both tangible and intangible, has not been properly documented. Amongst their less documented heritage is their wooden architecture which includes both their dwellings and mosques. 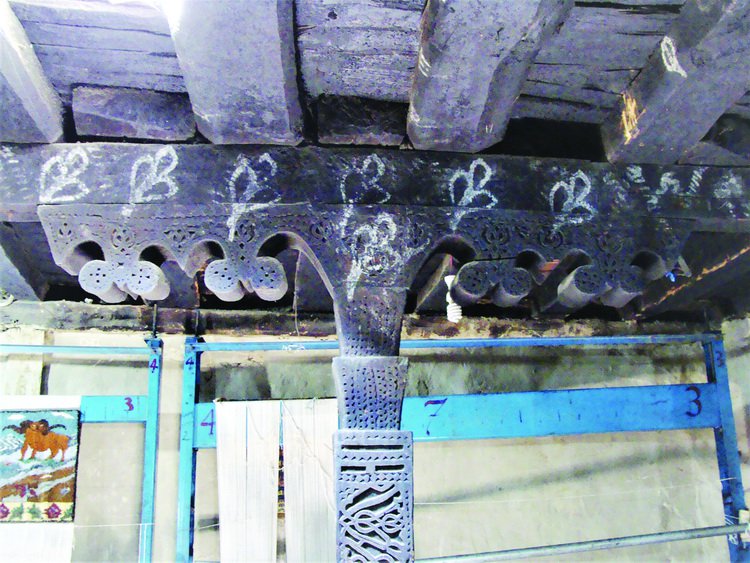 The Gojal valley reflects the peculiar character of Wakhi culture and art. It is host to many historic buildings erected in the 17th, 18th, 19th and 20th centuries. Gulmit, Ghulkin, Morkhoon, Gircha, Sost, Misgar (a Burushaski-speaking village), Shimshal and Chipursan are a few settlements where there are a number of such structures. Prominent among these are the Palace of the Mir of Hunza; the Bai Nazar Maktab; an old house and the Ondra Fort in Gulmit; Qirghiz Bai House in Ghulkin; an old house in Gircha; remnants of the houses of Mamu Singh (the first settler of Shimshal valley) in Paryar and Qalandarchi Fort in Misgar. 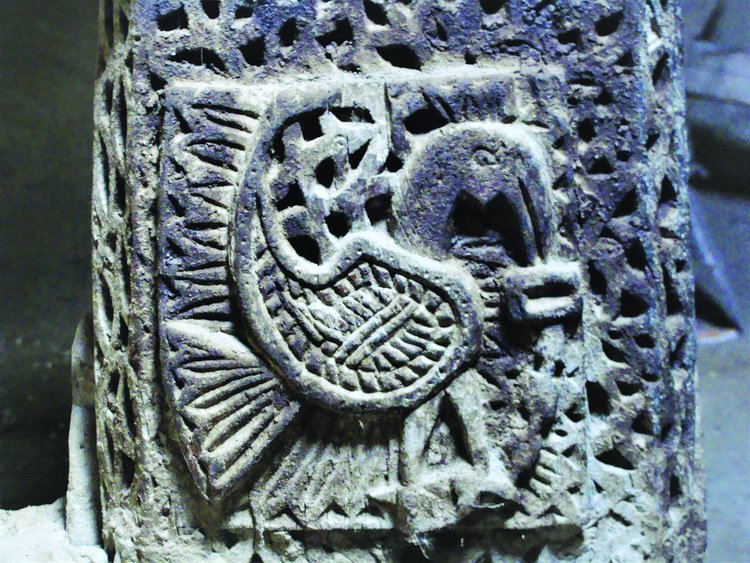 However, the wooden monuments of the Wakhi people are numerous in the two villages – Gulmit and Ghulkin in the Gojal valley. Two buildings in Gulmit, as well as the main town and headquarters of Gojal Tehsil, are noted for their beautiful wood carvings. The old house which is located near the polo ground is well known for its ornately carved door and windows. The old house has now been turned into a carpet weaving centre where female artisans make beautiful carpets from goat, sheep and yak wools.

The old house is a double-storey building. The lower one functions as a carpet weaving centre while the upper is used as a store house. The ceiling of the lower storey is supported by four pillars, which are decorated by intricate voluted capitals. Similarly decorated pillars with decorative capitals are also seen in many Wakhi houses, which indicate a general aesthetic and taste. The old house is a real prototype of traditional Wakhi houses, with four pillars supporting the main chamber of the house. In the centre of the room is located a fireplace. In winters, this place serves as a heating place. Around this are three elevated platforms called “razh” which are used as a sitting place during the day and turned into the bedroom at night. Usually, the ceiling is of “lantern” style with holes in the middle for the chimney of the bokhari (fireplace) to let out the smoke.

On the upper storey is the hall and just above it a one-room structure. The hall has three entrances. The pillars of the entrances are also decorated. Nowadays, this hall is being used for carpentry. Roofs of both the hall and the upper structure are made of mud.

The upper storey of the old house is a small chamber possibly used in the summer. It has a portico on the two sides and carved wooden windows on either side. The bases and the shafts of the pillars of the portico are decorated. The door of the chamber or sanctuary opens to the east. The carvings on the door are remarkable. The decorations on the side windows are also splendid. 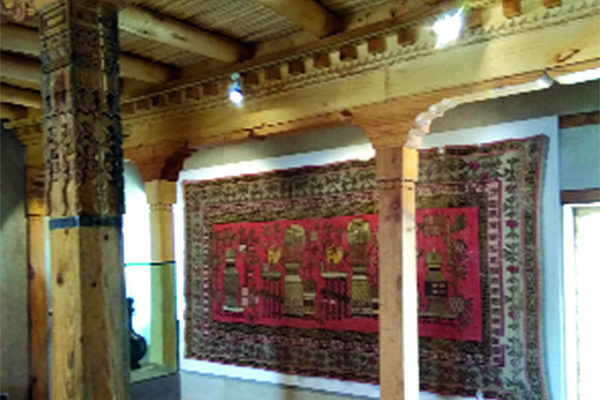 Another historical structure that dominates the landscape of Gulmit is the Maktab (school) which is believed to have been built in the 18th century. In the past the Maktab served as school where religious education was imparted to children.

The distinctive feature of the Maktab would be the bird carvings on the brackets of the pillars and on the main door. It has a doorway on two sides. The pillars are decorated and the wooden floor of the corridor is also quite remarkable.

It is built on a platform of rough round boulders held together with earth and their own weight. The walls of the structure are constructed in cribbage or cage style which is made of timber beams, filled in with either rubble or adobe blocks laid in earth mortar. A similar technique was also used while building the old house mentioned earlier. The cribbage style is peculiar to the Gilgit-Baltistan region.

Some of the most amazing structures employing cribbage technique are found in the valleys of Skardu, Ghanche, Shigar, Gojal, Hunza, Darel and Tangir etc.

There are a total 16 pillars, some decorated and other undecorated. The brackets of the pillars have more intricate carvings. Some of the brackets have geometric and floral designs. Two brackets have bird motifs which can also be found on the door lintel. These bird carvings can also be found on other buildings in the Gojal valley. However, the most amazing design is carved on the Ghulkin Maktab which was built by Mula Durbeen about 350 years ago as shown in the inscribed plaque fixed on the main entrance to the Maktab. The wooden windows on either side of the Maktab are also tastefully carved. In fact, the most beautiful and intricate carving is found on the main door of the Maktab. Both the ceiling and floor of the Maktab are made of wood.

The house of Qirghis Bai is the oldest in Ghulkin village. Qirghis Bai is said to have been the first Wakhi settler in the village. The carvings in this house are even better than those of the old house which lies unoccupied and is occasionally used for religious festivals. The most marvelous carving is of a bird on the base of a pillar. A majority of carvings reflect a tinge of pre-Islamic designs. The swastika motif is also carved on the bases and shafts of the pillars. It is also found on the doorframe of the house. It is also interesting to see some of the stupa-shaped designs which further reflect how the motifs of a Buddhist community, once dominant in these regions, were adopted by the Wakhi and other communities living in the valleys and villages of the Karakoram, Hindu Kush and Himalaya  mountain ranges.–This feature was first published in Ther Friday Times.

The author is an anthropologist and has authored four books: ‘Symbols in Stone: The Rock Art of Sindh’, ‘Perspectives on the art and architecture of Sindh’, ‘Memorial Stones: Tharparkar’ and ‘Archaeology, Religion and Art in Sindh’. He may be contacted at: [email protected]