In the viral video, a man identified as Agha Iftikharuddin Mirza can be seen giving threats to the Supreme Court judge.

“The [CJP] has taken notice of [a] video clip viral on social media containing derogatory, contemptuous and scandalous language against the institution of the judiciary and honourable judges,” a statement issued by the SC said. 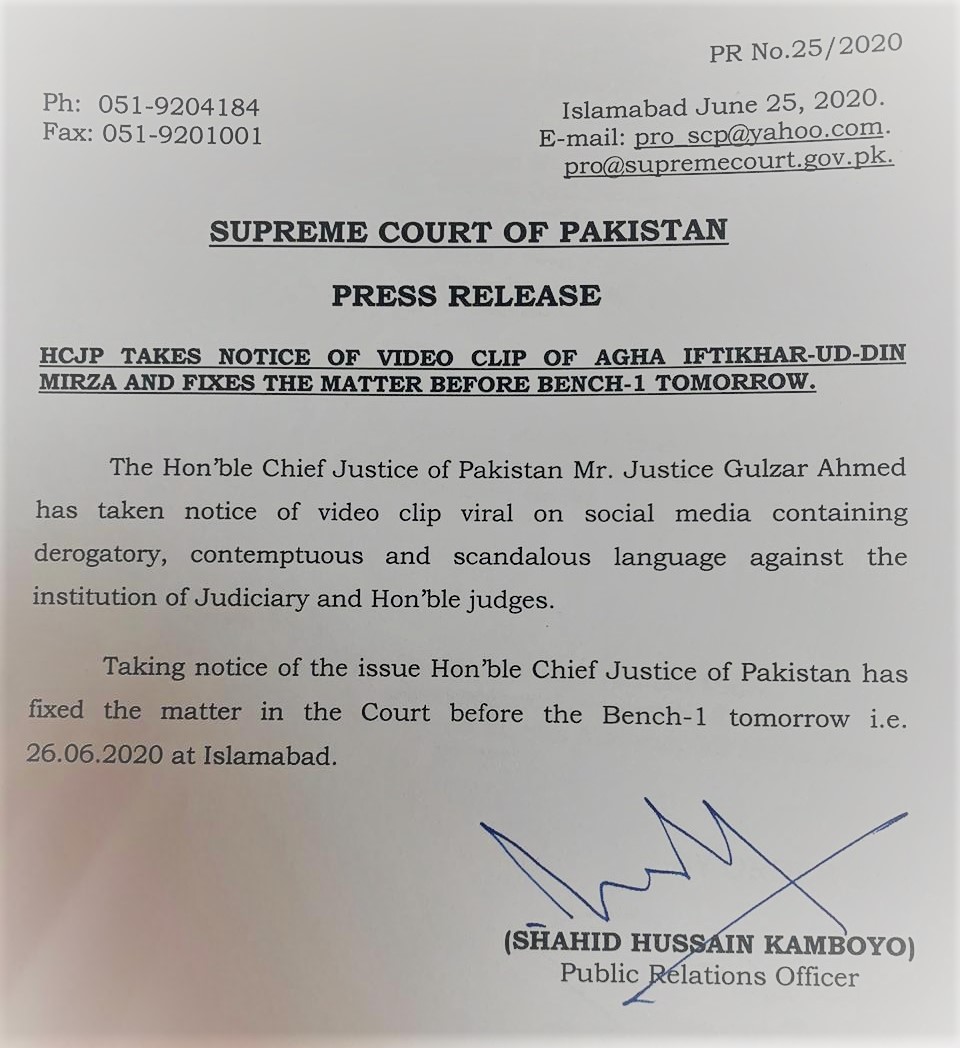 The matter was fixed for hearing for tomorrow (Friday) before Bench-1.

On Wednesday, Justice Isa’s wife, Ms Sarina, had informed the police that the life of her family was in danger as they were receiving threats and had requested officials to register a case against those who were threatening and harassing her family.

She had filed an application at Islamabad’s Secretariat Police Station.

“I am the wife of Mr Justice Qazi Faez Isa, who is a judge of the Supreme Court, and to whom a death threat has been extended,” she said in her complaint, adding that a person in a video had said that her husband should be shot publicly.

She also submitted a USB containing the threatening video message.

A search on the internet revealed the name of the person painting a target mark on my husband’s picture to be Agha Iftikharuddin Mirza, she said, adding that she had enclosed printouts of two documents which she had obtained from links appearing in the video, but did not know if this was his real name.

“As you must know many powerful people are not happy with my husband and I suspect that this death threat to my husband is in continuation of what we have been facing,” she said, adding that her father was seriously ill and today was the first day she had stepped out of the house after a long time.

“I do not want to lose my husband,” the complainant said.

Threatening to murder a judge of the Supreme Court of Pakistan was the worst kind of terrorism, the complaint stated, adding that many powerful people wanted to get rid of Justice Isa and it was the duty of the police to find out who they were and to arrest them.

On June 20, a 10-judge bench of the SC had quashed the presidential reference against Justice Isa, terming it “invalid”.

“[The reference] is declared to be of no legal effect whatsoever and stands quashed,” read the short verdict on a petition filed by Justice Isa and others seeking the reference’s dismissal.

The reference filed against Justice Isa — in line to become the chief justice on September 18, 2023, for 13 months — by the government in May last year alleged that he had acquired three properties in London on lease in the name of his wife and children between 2011 and 2015, but did not disclose them in his wealth returns.

Meanwhile, the civil society activists and organizations on Thursday expressed indignation at the threatening video message to Justice Is.

“We express the protest in strongest possible term and are outraged at, and our severest condemnation of, the appended video-recorded statement, purportedly of one Agha Iftikharuddin Mirza. 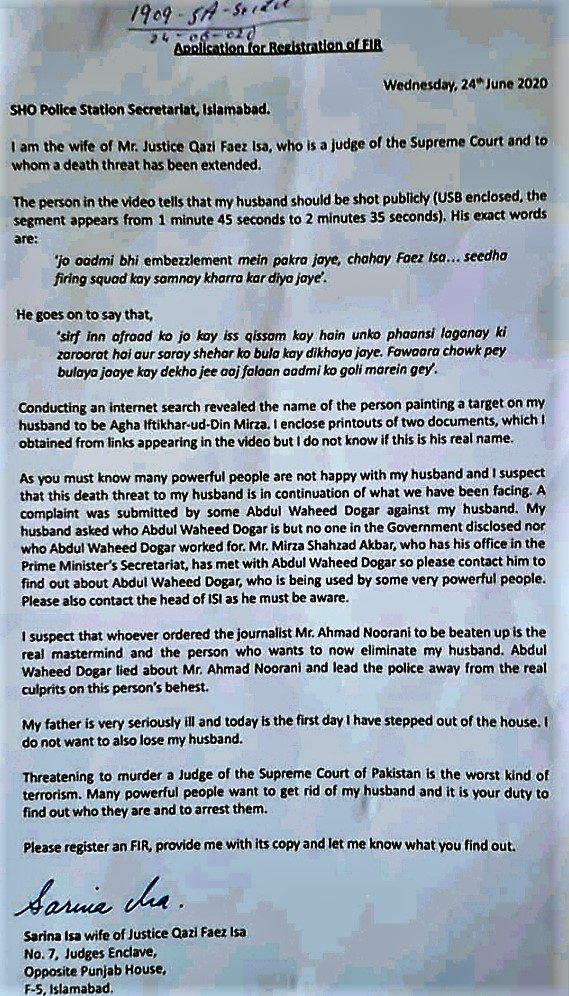 He has made direct, open, criminal death threats (with names and photographs) against high-profile citizens of Pakistan — calling for their being shot dead in a public chowk,” the joint statement read.

“We call for an end to the impunity that appears to be available for blatantly criminal acts. We call for urgent, meaningful, effective action by the LEAs, the intelligence agencies and, in this case, especially the FIA’s Cyber-Crimes Unit.”

We demand the restoration of the rule of law, together with Constitutional safeguards and protection of the right to life, reputation, honour and dignity of every Pakistani citizen. The writ of the State has to be effective in the service of its citizens.

They demanded that the person in the video must be arrested immediately and charged with incitement to murder; and sued for defamation.

“We demand immediate State protection for Justice Isa and his family, as well as for all those named or depicted in the appended video clip.

They also demanded prosecution of the man spewing inveterate hatred and violence in the appended video clip.