As the first ray of light gleams on the snow-capped mountains of Gilgit-Baltistan, a select bunch of girls wake up to prepare for a long day ahead, full of challenges. They will be playing football on the rugged mountainous terrain of the beautiful Gilgit-Baltistan’s Hunza Valley. Despite not having even one proper football ground available in the entire region, these girls have defeated all odds and organised several small football matches, including the Gilgit-Baltistan Girls Football League (GBGFL) in 2018 and 2019.

Karishma and Sumaira Inayat, two sisters and sports enthusiasts, who set up the GBGFL, have been working tirelessly to encourage girls from the region to participate in sports for a number of reasons. They strongly believe that sports can benefit girls in the region greatly. Along with helping to make them more confident and allowing them to showcase their non-traditional skills, they feel the girls’ involvement in sports can enable them to score sports-based scholarships and pursue higher education at different universities across the world.

Football can not only showcase the capabilities of these young women, the sisters feel, but it can also help them gain fitness and financial independence down the road, both things that are a step towards women’s empowerment in today’s fast-moving society.

When GBGFL took place for the second time in 2019, there was a huge turnout. More than 200 girls participated and eight teams played in the competition. If one looks at the pictures and videos from the tournament, one would be extremely surprised to see the lack of resources available to such hardworking and talented players.

The football skills that were visible during the matches were phenomenal. However, seeing such young girls play on a rocky surface, it is not difficult to imagine that they must have suffered a lot of injuries, as well as have had their performances hampered by the dust flying from the barren pitches.

Had there been a proper football ground, the players would have been more comfortable in playing up to their full capabilities. Do not let the picturesque view of the mountains fool you — because not only did the players face difficulties, the crowd that came to support them also had only boulders to sit on at the ground.

The resilience of everyone present at the tournament was unmistakable, but it is also an indicator of how the situation is crying out for positive engagement.

The government and the Pakistan Football Federation (PFF) have to step up and reward these players with sponsorships and stadiums that can assist them in their dreams.

Women footballers of Gilgit-Baltistan have managed to beat all odds to organise several matches and a tournament in their mountainous region.

Furthermore, there is also a visible lack of female coaches and referees, which needs proper attention as these young and impressionable minds need proper guidance to hone their skills. These girls are assets that can represent Pakistan globally, seeing that other developing countries have also stepped up their game in this regard.

The teams consist of agile players and fast learners, who have often been held back by financial and societal barriers. Their mere participation in this tournament has instilled confidence, unity, and leadership skills in them, and they have managed to encourage thousands of girls and their families to be a part of such initiatives.

Nabila is the captain of the winning team of GBGFL-2019, Chipursan. She says that the best part about her experience with the tournament was the fact that her team recognised their responsibilities in their respective roles. Their coordination was brilliant throughout practice and the championship matches.

“I believe that the girls in my team have a keen understanding of the dynamics of the team and they coordinate in a way that makes it easy to achieve effortless passing,” she says, adding that she takes pride in the fact that the biggest strength of her team were the strikers and the goalkeeper.

Nabila recalls that, in the days leading up to the tournament, her team faced difficulties in gathering together to practice since they lived in villages far from each other, and that there was no proper ground to practice in. “We managed to get together and practice for just a week before the games started when we found a cricket ground at our disposal,” she says. “Winning the tournament was a huge boost in return for all our struggles and determination.”

Nabila practises football with her brothers, and she yearns to have one proper football ground that would cater to the women interested in sports. She speaks about how there are plenty of women in the region who might not be exemplary students but have a different skill set in sports, that can do wonders for them.

“Many girls from the GBGFL have gained educational scholarships on sports basis in universities in Lahore and Islamabad after the tournament gained media attention,” she points out.

Nabila also says that despite managing to get some sponsorship in the tournament, they needed further support. “People in different positions in sports boards who attended the tournament did promise to support and fund the league. However, due to the recent lockdown, no progress has been made. Either way, the investors are more than welcome to contact the various leisure leagues and clubs that exist in the region, organised by schools and colleges,” she says.

Being a leader and the captain of her team, Nabila does enjoy being appreciated by her team members and she is proud she was able to hone her skills to lead the team to victory. Her teammates look up to her and this, in extension, comes with the responsibility of being a role model to thousands of girls living in the region.

She passionately speaks about how these young women need the support of their parents and hopes that the slanderous remarks from society, their suspicion and backbiting would end so that they can move forward and reap the fruits of their indulgence from sports. 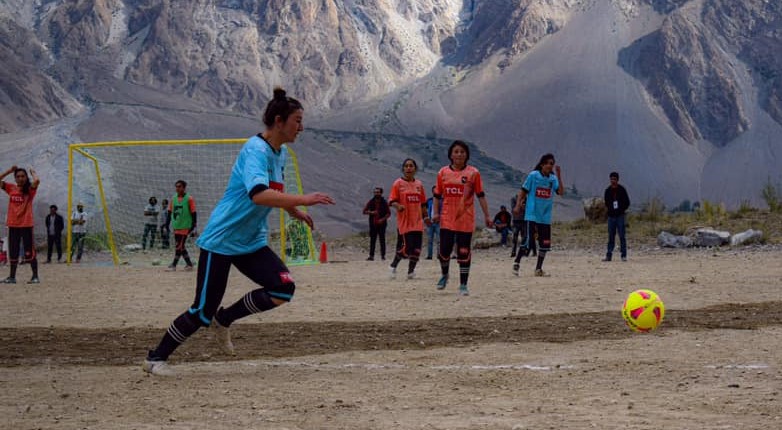 Nabila wants society, as a whole, to evolve and become more accepting of women’s sports.

“Being financially unable to access good quality education should not stand in the way of our youth, especially our women, and when this problem can be countered by sports, nothing in the world should be able to stop them from achieving their dreams,” she says.

With a lack of communication between cities, and being cut off from the rest of the country, the women in this area often have no idea of the universities that have excellent sports facilities and which cater to such football enthusiasts on national and international levels. If only the internet and telephone access could be made better, many women would be able to reach out and apply to these universities.

The brilliant women from Gilgit-Baltistan deserve these opportunities. Hopefully, they will gain access to them one day. This feature was first published in EOS Sunday magazine of Dawn, July 5, 2020

Ayesha Izhar is a junior editor with a publishing house. She tweets @UnitedFreak