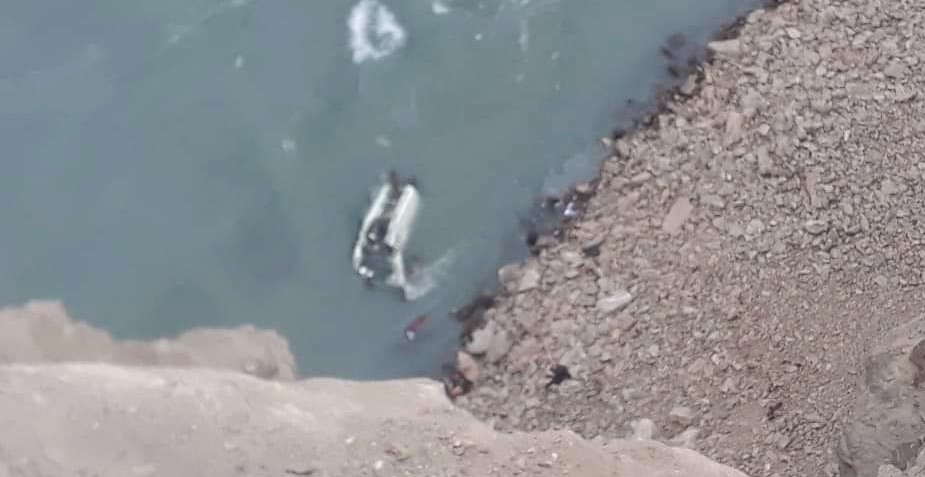 10 bodies have been fished out of the might Indus; rescue work continues to recover 16 others

SKARDU, March 9: At least 26 passengers including two minor children, a mountaineer, and an army man died in a road accident at Rondu, Skardu district of Baltistan on Monday, local administration and police officials confirmed to The High Asia Herald.

According to Ghulam Murtaza, Assistant Commissioner Rondu Tehsil, 10 bodies have been fished out of the river and shifted by army helicopters to the Combined Military Hospital, Skardu for the medico-legal procedure.

The dead were handed over to the heirs after identification and dispatched to their native towns.

Moving scenes were witnessed during the funeral rites of the 31-year-old Sajid Hussain, a resident of Alchun, upper Shigar, his wife Neelum, three-year-old daughter Rida and two-year-old son Salar.

The coaster of Inchan Travels, a private transport service, with 26 passengers on-board was on way from Rawalpindi to Skardu when it skidded off the treacherous road while negotiating a sharp turning and fell into the Indus River.

The deceased were identified as Khan Saib (46), a resident of Kohistan; Sajid Hussain (31), a resident of  Alchori, Upper Shigar; his wife Neelam, daughter Rida (3), and son, Salar (2); Sepoy Muhammad Ishaque, (41), 104 Engineering battalion of army; Ashraf (22), and Muhammad Sadiq, a resident of Bhakkar, Punjab.

Shabbir had climbed several mountains including Broad Peak. He was coming to Skardu from Rawalpindi along with his friend Mehdi Sadpara.

There are reports that some private transport companies are plying buses and vehicles without a permit on the Rawalpindi-Skardu route.

The Excise and Taxation Department has found recently that some vehicles are plying on the route in the name of Inchan Travels without a permit.

The authorities have sent a notice to the company calling him for an explanation for March 10.

Such accidents are common in Pakistan, particularly in the mountainous north, due to careless driving, poorly maintained vehicles, and a lack of adequate infrastructure.

In September last year, 26 people including 16 army personnel and women died and 11 others sustained injuries when a Rawalpindi-bound bus from Skardu met an accident near Babusar top in Diamer district.

In August 2019, 40 people were killed when a bridge collapsed near the Kandia tehsil in the Upper Kohistan district.

All the passengers belonged to the same family and were travelling to attend a function.

In October 2018, over 20 passengers were killed when a passenger bus fell into a deep gorge while travelling on the KKH in Kohistan’s Lotar area.

The bus was headed to Rawalpindi from Gilgit-Baltistan’s Ghizer District.

Pakistan ranked first in Asia in road accidents. Some 9,000 road accidents are reported in the country every year, killing around 40,000 people, according to official statistics.

According to a report, 67% of the accidents could be attributed to human errors, 28% to poor infrastructure as well as the condition of roads and 5% to unfit vehicles.

Many precious lives are lost in devastating road accidents in GB due to poor condition of roads, worn-out vehicles and underpaid and overworked drivers and violation of traffic rule, says Abid Karim Taishi, a local political activist.

Sadly, the government authorities and private transport companies do not realise the gravity of the situation and their responsibilities in enforcing traffic rules and ensuring the safety of thousands of passengers travelling daily on the treacherous mountain roads, he added.

There is no check on conditions of vehicles, regular maintenance of roads to avoid or at least minimize accidents.

Some activists blame faulty road engineering and construction mostly by private contractors and FWO, the construction wing of the army.