Even if we change our emissions now, we are committed to a lot of ice melt, says Prof. Kääb. Image credit: Sharada Prasad

We need to understand how glaciers are shrinking in order to better adapt to climate change impacts such as changes to water supply, landslides, and avalanches, says Prof Andreas Kääb from the University of Oslo in Norway in an interview with Steve Gillman published in The Horizen, an EU research and innovation magazine.

Measuring ice melt and the unprecedented changes in our cryosphere – the frozen parts of the planet which regulate the climate by reflecting the sun’s heat – is crucial for understanding future situations, he says.

We spoke to Prof Kääb about the importance of the cryosphere and what we know about how it’s changing.

Why is the cryosphere important?

‘The cryosphere – that is glaciers and ice sheets, snow, sea ice, permafrost, and lake and river ice – and changes of the cryosphere affect the lives of hundreds (of) millions (of people) and many ecosystems in various direct and indirect ways. Seasonal or year-round snow covers around 45 million sq km, and glaciers and the Greenland and Antarctic ice sheets an additional 15 million sq km, together (constituting) around 40% of the Earth’s land area.

‘Importantly, most ice on Earth is very close to melting conditions, a few degrees below 0°C, and thus reacts very sensitively to changes in air temperatures. Small temperature changes can trigger melt and (large) environmental changes. Sea level change through increased melt of glaciers and ice sheets is certainly the most far-reaching effect of ice melt on Earth.’

How are sea levels changing?

‘Melting of glaciers, (and) the two ice sheets in Greenland and Antarctica contribute to more than half of the currently measured sea-level rise and they are projected to contribute more. The other half is thermal expansion – as the ocean gets warmer it expands – and all this sea-level change affects people around the world, especially in coastal areas, (and) even if living far away from the melting ice.

‘Mean sea level is projected to rise about 1 metre by 2100 and will threaten coastal societies. How much the ocean would rise in (the) case of an unrealistic, complete melt of the Antarctic ice sheet is around 60m.’

What are the other impacts of ice melt?

‘In terms of more local effects, there are a number of hazards relating to glaciers and thawing permafrost that we expect to increase. For instance, if glaciers retreat they leave steep mountain flanks uncovered so there are debris and rocks that are set to destabilise. So, we expect more rockfalls or debris flows from such areas.

‘Greenhouse gas emissions from thawing permafrost are much less understood but could have an equally wide, actually global, impact by enhancing manmade emissions.

‘Then there are also hazardous situations that could actually improve. (Ice avalanches from glaciers)  can destroy infrastructure, houses and kill people. But (there’s) the extreme case (where) if a glacier retreats very much, then the hazard from related ice avalanches could actually reduce.’

Do you think we have passed a tipping point when it comes to ice melt?

‘The term tipping point is a bit controversial because in most cases we don’t really know. Another term that is better is what the IPCC (International Panel on Climate Change) uses – committed (climate) change. So, climate change that man has contributed to have committed changes to the future.

‘That means the excess energy that mankind has already caused (through greenhouse gas emissions capturing the sun’s heat) will commit a long-term change in glaciers, ice sheets and ocean temperatures. Change that, let’s say, over a hundred years is irreversible. Even if we change our emissions now, a lot of ice melting has been committed.’

You focus on glaciers. Why do we need to understand glacier change?

‘Glaciers are typically found comparably close to where people live. That means their changes affect people quite directly. Understanding glacier change helps to adapt to related climate change impacts such as changes in dry-season run-off and water supply, changes in glacial landslides and avalanches, or changes in the touristic value of glaciers.

‘Glaciers reflect climate change in a very visible and clear way. Their shrinkage has become for good reason an icon of climate change. For scientists, glaciers are important to illustrate climate change and make it understandable for a large audience.’

You were the coordinator of ICEMASS, a project using satellite imagery to measure and analyse changes to glaciers. How did you analyse change?

‘We have increasingly more and more different satellite data, and what the satellites measure is very different. My main goal, my main achievement, of the ICEMASS project was actually bringing different data together and integrating them. For instance, we use optical satellite images repeatedly to measure glacier flow. This works perfectly fine unless you have a cloud cover or polar night (24-hour darkness). Then we use radar images that penetrate through clouds for the same purpose. But this does not give us the volume of glaciers.

‘For that we use, among others, satellites that shoot laser beams, like your laser pointer, and they measure the return time of this signal. The signal is sent from a satellite, bounces (off) the glacier surface, and comes back to the satellite. The time difference is directly related to the distance from the satellite to the (glacier surface). So, if you know the satellite position very well, which we do, then you can measure the height. And if you do that, over time, repeatedly, you get also the changes in glacier thickness and volume.’ 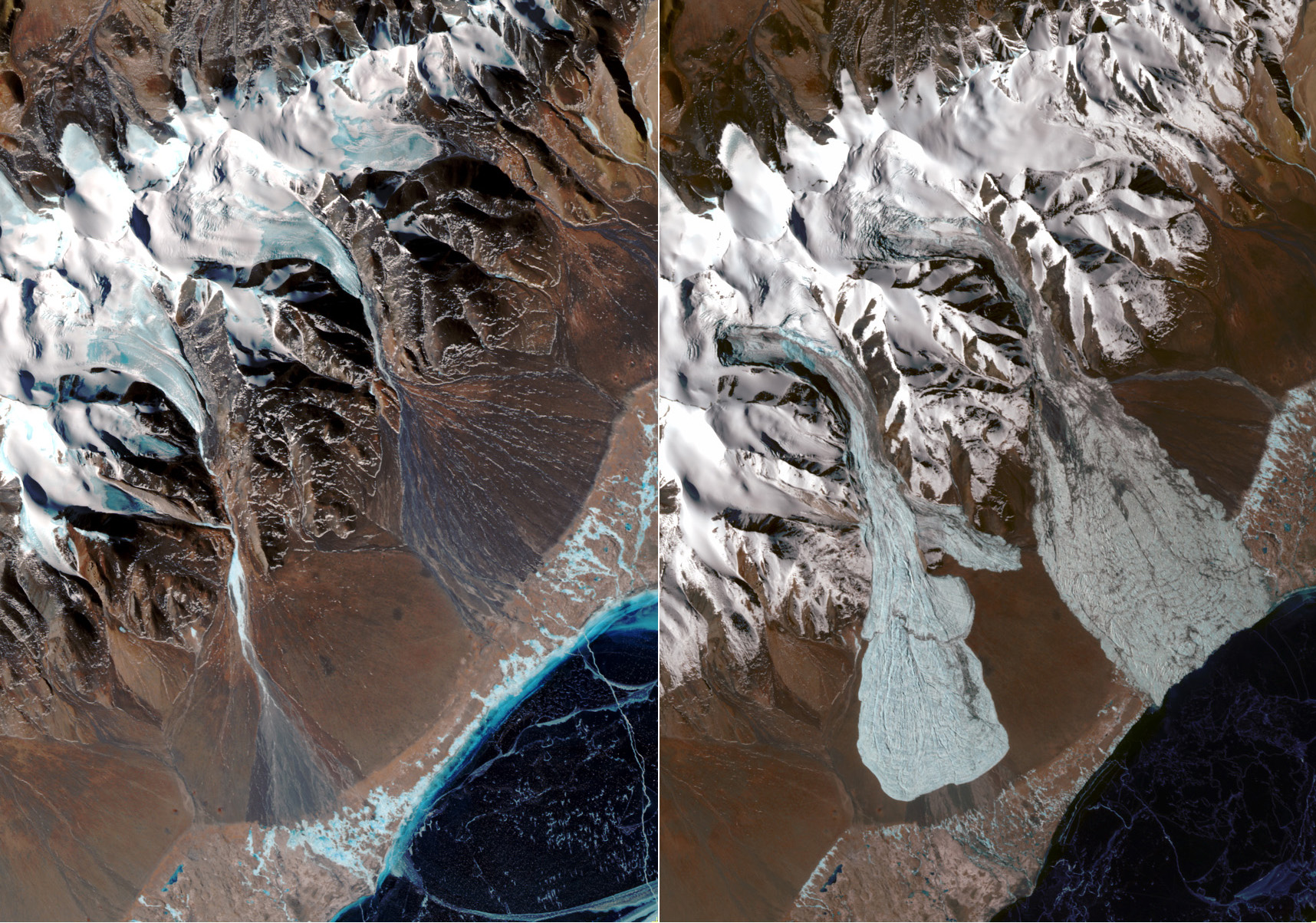 And what did you find?

‘For me, personally, the most important results are more regional scale results. We developed glacier volume changes over a number of areas where little was known before. One of the examples that made it into the Nature journal, for instance, was glacier volume changes over the Himalayas and Central Asia. There were a lot of different numbers around for these melting glaciers – some actually massively contradicted each other – from very little change to massive change. And we (really) narrowed this uncertainty down.’

What did your project reveal about the state of glaciers around the world?

‘We found glacier mass loss in almost all regions we looked at. Unexpected large losses we measured in the European Arctic, on Svalbard. The massive retreat of sea ice in this sector of the Arctic raises air temperatures at a rate of roughly double the global average. The result is glacier melt rates (that are) much higher than one would expect so far north. In addition, about half of the glacier mass loss comes not from direct glacier melt but from glaciers that massively increased their ice flow and thus their ice discharge into the ocean.

‘(We found) unexpected low changes in glacier mass, lower than the global average, in parts of Central Asia, in the Karakoram, Pamir, and western parts of Tibet. There is even a region where glaciers grow a little bit. By also measuring changes of lakes without direct river outflow, we could show that the region received in recent years more precipitation, which let the lakes and the glaciers grow, despite air temperatures increasing at the same time.’

This year’s IPCC Special Report on the Ocean and Cryosphere says climate change will cause up to 80% loss of glaciers in some places by the year 2100. What can research do to help society prepare for this future melting?

‘Carbon dioxide levels are much higher than they have been for the last 1 million years or more. This means our climate is at a stage where we don’t have the historical experience to build sound statistics on extreme events. So, we need to monitor more what is going on now and then we need to better model future scenarios.

‘The EU has its own fleet of satellites, the Sentinels within the Copernicus programme. They are really a game-changer because before them there were mostly occasional scientific satellites.

‘These EU satellite constellations, in my experience, help develop models and strategies for really long-term perspectives. (We need these) satellites to allow for the long-term, consistent, observations that we need to predict and adapt to climatic changes.’