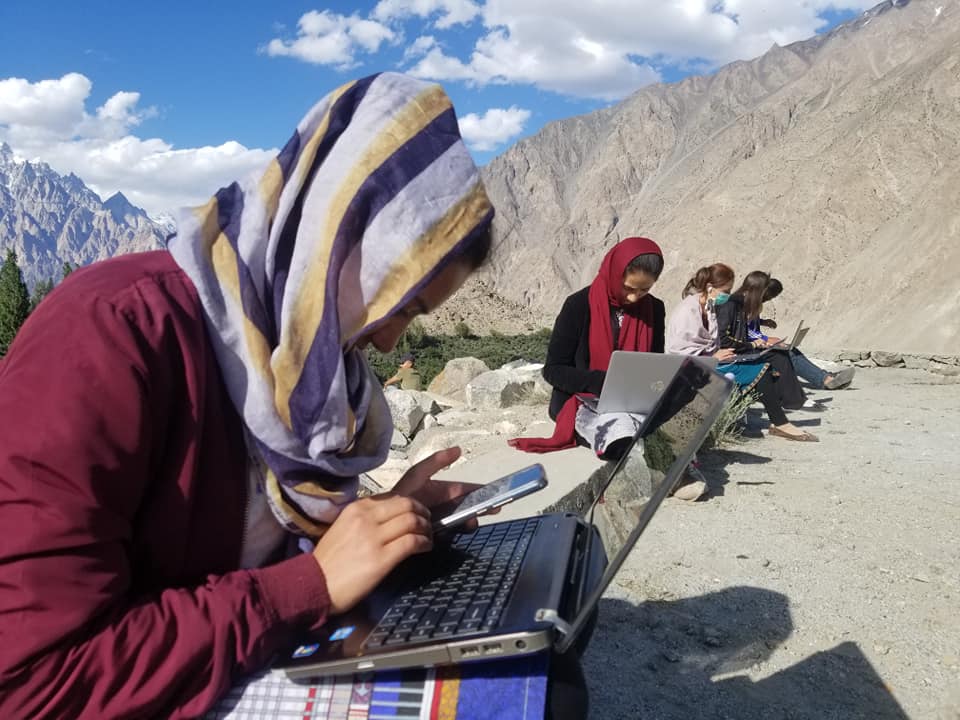 Students trying to catch signal at a vantage point on a hillock at Gulmit, Gojal Sub-Division of Hunza to attend online classes. Photo: Ali Ahmed

The youth-led digital rights movement that was born out of a perpetual internet crisis in Gilgit-Baltistan has unveiled a 13-point charter of demands (CoD) for improving the telecom service, and equal opportunity for all to access to the internet in the mountainous region

Prepared by the local bloggers, IT experts, professionals, socio-political activists, academia, civil society and the students, the CoD for digital rights of Gilgit-Baltistan, also calls for an end to the monopoly of the Special Communication Organisation’s (SCO), a subsidiary of the IT ministry but controlled by the army’s telecom wing, by allowing other competitors to operate 4G data sharing service in the region.

The charter of demand also calls for an amendment to the Pakistan Telecommunication Reorganization Act 1996 by removing Section 39 and 40 of the act to allow other telecom operators to operate in GB as these clauses have barred other telecom giants to enter the GB market.

“All citizens of the region must get equal opportunity to get connected to the World Wide Web through Fixed Broad Band Internet and mobile LTE services. The facility must be declared a fundamental right of all citizens,” the charter read.

The jurisdiction of the Pakistan Telecommunications Authority (PTA) and the Universal Service Fund (USF) must be extended to the Gilgit-Baltistan. A regional office must be set up to regulate the telecom service in the region.

The CoD further demands that the government must ensure the auction of 3G/4G spectrum for GB under PTA and benefit remote areas where the telecom business is not viable from USF for mobile coverage. 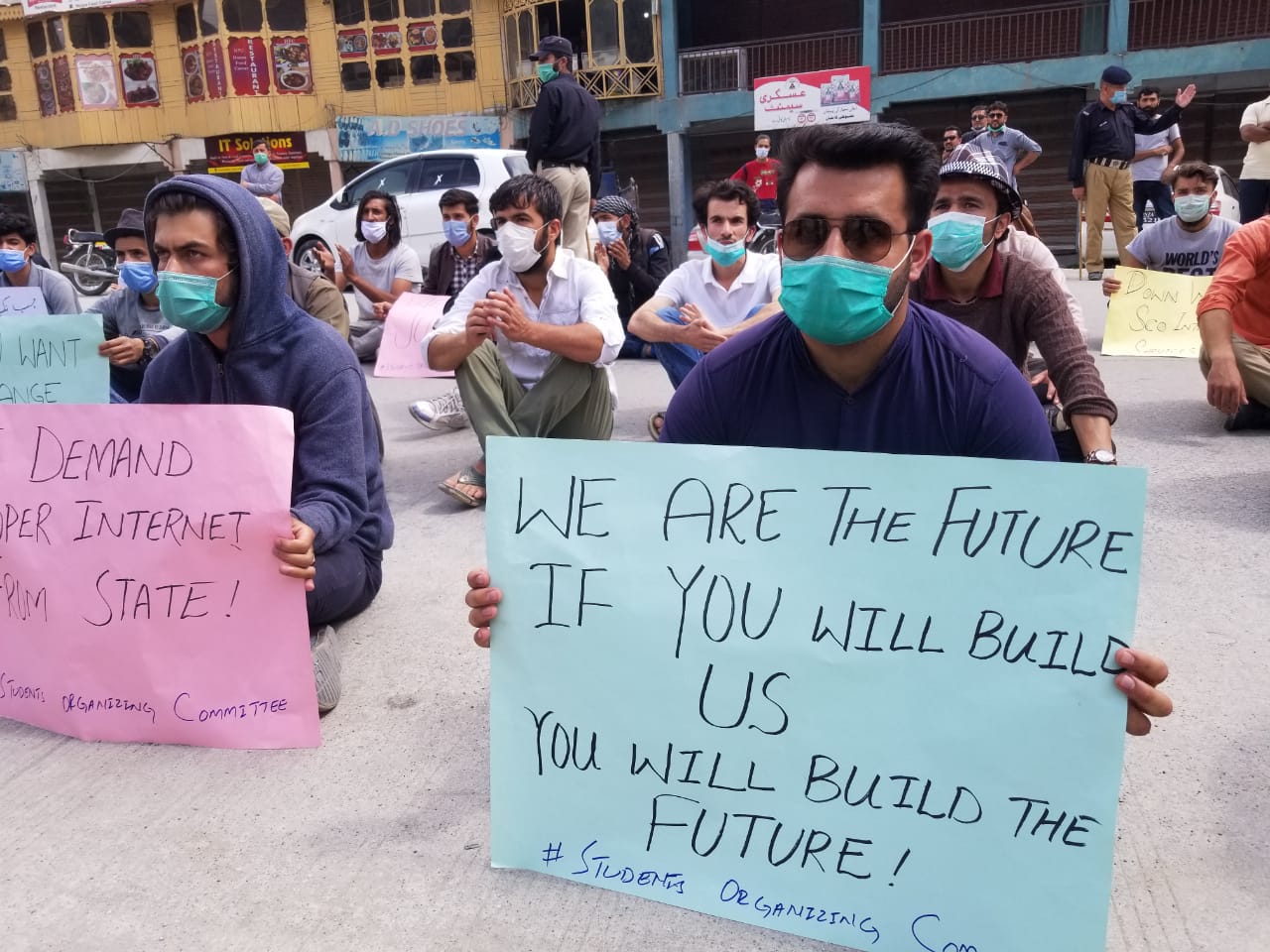 Existing infrastructure must be improved and linked to the optical fibre under the China Pakistan Economic Corridor (CPEC). The number of telecom sites must be enhanced, installation of generators to be ensured at far-flung sites where there is a power break-down issue.

The CoD also demanded that the optimization and planning department must be introduced at SCO to ensure adequate signal strength, coverage and capacity of the network.

The professionals from GB should be hired for drive testing and post-processing to remove call connection issues, handovers, frequency interferences and for checking services.

Network availability, integrity and retainability issues must be monitored by robust modern tools used for network surveillance. The internet speeds for each service and package must be as per international standards.

Freelancers and internet entrepreneurs must be given high bandwidth connections on subsidized rates to improve the digital ecosystem of the region.

Customer support must be improved and Interactive Voice Response (IVR) services in local languages must be implemented.

IT parks, incubation centres, optical fibre and triple-play services must be introduced in high traffic and urban areas of Gilgit-Baltistan.

The CoD further elaborates that the Covid-19 global pandemic has pushed the world economy, technology and academia into a standstill disrupting the socio-economic and political activities throughout the world.

The social distancing has increased dependency on technology, inequality and the digital divide in all sphere of life.

The pandemic has hit hard Pakistan’s economy and service sector. Over 12 million people have lost their jobs, half of the population pushed below the poverty line and many are seen trying to find avenues to generate income online via virtual platforms.

Educational institutes have been shut since March. While some institutes have continued their academic activities through online classes. The corporate sector has adopted the work-from-home model.

The widening digital-divide and poor infrastructure have aggravated the situation, especially in rural and mountain regions. Although the urban centres have digital access, the internet facility, the peripheries are lagging behind to have decent internet connectivity which is considered a fundamental right.

Gilgit-Baltistan is one of the peripheral marginalized areas being hit hard by digital-divide besides having poor infrastructure, crippled health and education sector.

The people of Gilgit-Baltistan are unable to cope with the situation due to degraded 4G often termed as Long Term Evolution (LTE) and fixed broadband internet services provided by SCO.

The students and professionals who can afford have started travelling to other parts of the country to continue education and secure their jobs. Others have to freeze their semesters and drop out because of poor internet services.

This situation prompted students to launch protest marches against SCO in Ghizer, Gilgit and Hunza districts under the aegis of Students Organising Committee and in Skardu by All Baltistan Movement as well as the Diaspora of Gilgit-Baltistan to raise their voices on social media. A massive campaign has been launched under #Internet4GilgitBaltistan that had become a top trend on Twitter in Pakistan highlighted by mainstream and international media.